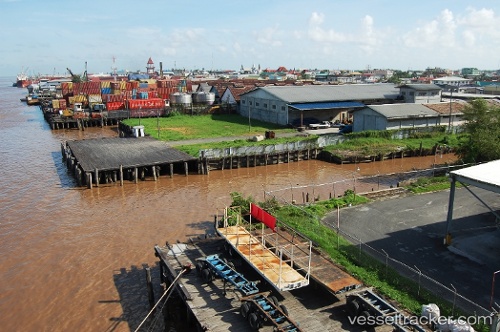 The South American country of Guyana says it plans to use $18 million from India's Exim Bank to buy a new, safer coastal ferry Public Infrastructure Minister David Patterson says $10 million will be treated as a loan and the remaining $8 million as a grant.He said Thursday that the ferry will travel what he called a "treacherous" 24-hour route between the capital of Georgetown and Guyana's northernmost region near Venezuela. Hundreds of people currently use outdated ferries that serve that route because it is cheaper than air transportation. The government of India loaned Guyana $25 million more than a decade ago to build a stadium source: dailymail

Guyana's president says India has pledged $60 million to help the South American country buy a large ferry and build a four-lane highway. President Donald Ramotar says the highway is to connect Guyana's main international airport to a large highway near the capital of Georgetown that runs to the coast.He said late Thursday that $10 million of the amount pledged will be used to buy a passenger and cargo ferry that would operate between Port Georgetown and remote jungle communities near the border with Venezuela. India and Guyana have collaborated on other projects in recent years, including a cricket stadium and a hospital. About 44 percent of the 736,000 people who live in Guyana are descendants of people from India who came as indentured workers. Source : abcnews