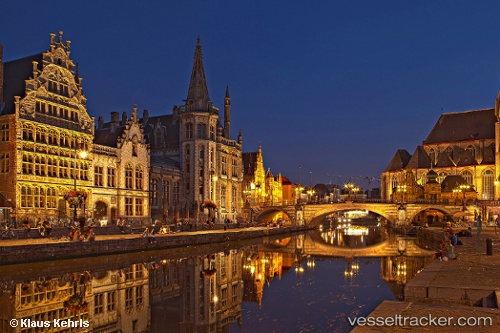 ArcelorMittal Gent, the Flemish investment company “Participatiemaatschappij Vlaanderen” (“PMV”), Euroports and North Sea Port are collaborating on the first ever roofed loading bay and warehouse in Ghent: the “All Weather Terminal” (AWT). An investment worth more than 50 million euros. The new terminal is being built next to the existing mixed cargo bay of ArcelorMittal Gent and will be used in the first place to store and ship finished steel coils. Twenty percent of the storage capacity can also be used for the handling of other materials such as paper or other mixed cargo. The new “All Weather Terminal” will be owned by AWT GENT NV, a company founded by PMV and EPICo (www.epicofund.eu). AWT GENT NV, who are responsible for the design, construction, financing, maintenance and exploitation of the Terminal. Thanks to “AWT”, AWT GENT NV will be able to provide services to ArcelorMittal Gent and other customers. AWT GENT NV entrusts Euroports with the role of maritime logistics, namely the distribution of flows from, to and in the AWT.

DFDS has signed a long-term sub-concession agreement and partnership with the Port of Ghent’s Mercatordock concessionaire, the Belgian group Sea-Invest – a privately-owned company and one of the largest stevedores in Belgium and Africa.

The authorities of the Belgian Port of Ghent and the Dutch port of Zeeland have penned a merger agreement for submitting to shareholders and works councils. The joint merged entity will have a value in shares of around US$1.2 billion. If proposals are accepted, a new name for the unified cross-border port area and the merged company will be announced. This is provisionally planned for December 8, 2017. Ghent port is expecting the proposal will be green lighted, given environmental recommendations by the Samsom committee and changes to the Flemish port decree being put to a vote in 2018. Next week the two port authorities plan to present these proposals to their shareholders and in three months the stakeholders will return their verdict on the merger between the two port authorities to create a unified, international port authority. Shareholders for both port authorities were presented with the outline of a possible merger in June, 2017. https://www.porttechnology.org/news/two_eu_ports_plan_1.2_billion_merger