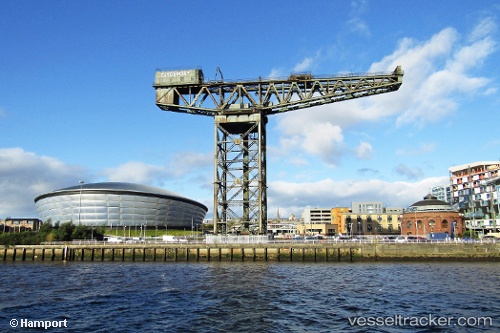 Scotland’s First Minister Nicola Sturgeon launched the UK’s first LNG-powered passenger ferry at Ferguson Marine Engineering’s shipyard at Port Glasgow on 21 November. Named Glen Sannox, the 102-metre-long vessel is one of two ro-ro ferries that are being built as part of a £97 million contract on behalf of Scottish operator Caledonian Maritime Assets Limited (CMAL). The vessel will be able to operate on both marine gas oil and LNG fuel, which will reduce CMAL’s emissions in line with Scottish Government targets. “Ferguson Marine Engineering makes a significant contribution to the Scottish industrial sector and to the Inverclyde economy,” said Sturgeon. “These state-of-the-art ferries are more sustainable, therefore contributing to Scotland’s world-leading climate change goals. They are also capable of carrying more vehicles and benefiting the communities that rely on them.” Glen Sannox is designed to carry up to 1,000 passengers and 127 cars or 16 HGVs.

Scottish ferry operator Caledonian MacBrayne (CalMac) says it has signed a contract with Caledonian Maritime Assets Limited (CMAL) for two 100 metre long, dual-fuel ferries worth £97 million ($150 million), Scottish media reports. It is reported that the ferries will be able to run on both liquid natural gas (LNG) and marine diesel, and will be the fourth and fifth such additions to the ferry operator's fleet, with two already in operation and a third set to be added into service in December. "I'm delighted this contract has been formally awarded to Ferguson Marine Engineering Limited (FMEL) and the shipyard can now start work on these new 100m ferries, the largest commercial vessels to be built on the Clyde since 2001," said Derek Mackay, Scotland's Minister for Transport and Islands FMEL is reported to be responsible for the design, construction, and testing of the two vessels, which are said to be set to operate on CalMac's Ardrossan-Brodick and the Uig Triangle routes. http://shipandbunker.com/news/emea/775429-scottish-ferry-operator-inks-97-million-deal-on-two-dual-fuel-vessels

The first roll-on/roll-off electric diesel ferry hybrid in the world has been launched from Port Glasgow on the River Clyde. This is the first time in over five years that a fully built commercial vessel has been launched on the river. Deputy First Minister Nicola Sturgeon was on hand as MV Hallaig was set on the water. The ship, which was constructed by Ferguson Shipbuilders, is one of two sister vessels that will be operated by CalMac Ferries. A £20 million loan from the Scottish government has supported the building of both vessels, as well as the security and creation of 20 apprenticeships and 175 jobs in the local community, supporting local economic growth. An extra £450,000 has been invested by the European Regional Development Fund.