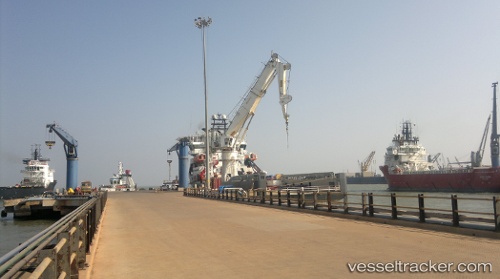 Kakinada Port, India’s new alternative east coast gateway that began container-handling at the end of last year, got its first break from a mainline customer with Maersk Line introducing a direct port call at the minor privately-operated facility as part of what the container line said was "moving closer to shippers and seeking new growth areas."In a customer advisory, the Danish carrier said its Mesawa service connecting the Indian subcontinent, the Middle East and Africa will offer regular, weekly calls at Kakinada.The expanded Mesawa rotation is as follows: Jebel Ali, United Arab Emirates; Mundra, Nhava Sheva (Jawaharlal Nehru Port) and Kakinada, India; Colombo, Sri Lanka; Durban, South Africa; Luanda, Angola; Pointe Noire, Congo; Apapa and Tin Can Island, Nigeria; Cotonou, Benin; Port Elizabeth and Durban, South Africa; Port Louis, Mauritius and back to Jebel Ali. “We are excited to announce the addition of Kakinada in the list of our port of calls with a fixed vessel schedule. This is a continuation of our belief to be closer to our customers and grow with the market in a profitable manner,” Maersk said. “By providing our services in Kakinada, we are not only giving customers control of their cargo, but also helping them expand their businesses globally."Kakinada Container Terminal is a joint venture between Singapore’s PSA International and two local groups: Kakinada Infrastructure Holdings and Bothra Shipping Services. The Kakinada port complex, which is located between Visakhapatnam and Chennai, is under the control of Andhra Pradesh State Authority.“At present, no container facility is available at the port. By providing such facilities, Maersk Line is helping to create a dynamic business platform,” Maersk said. “Convenience of stuffing and de-stuffing operations within the port area will promote operational efficiency.”The Kakinada container facility comprises a quay length of nearly 1,000 feet and a set of cargo-handling equipment like harbor cranes and reach stackers, with an annual capacity of about 200,000 twenty-foot-equivalent units.Port statistics compiled by JOC.com show Kakinada Port handled about 18 million tons of cargo in fiscal year 2014-15, which ended March 2015. Source: The Journal of Commerce

he Kakinada Container Terminal (KCT), a joint venture company of equal shareholdings among Kakinada Infrastructure Holdings Pvt Ltd (KIHPL), PSA Chennai Investments Pte Ltd (PSA Chennai) and Bothra Shipping Services Pvt Ltd (Bothra), was launched at a trade meet in the city. KCT will have an initial annual handling capacity of 200,000 Twenty-foot Equivalent Units (TEUs) of containers. It has a 300 metre quay as well as mobile harbour cranes and reach stackers. KCT is situated in the Kakinada Deep Water Port (KDWP), an all-weather port in Andhra Pradesh, and is sheltered by a natural breakwater. The port is well positioned to serve east India’s agricultural, seafood and commodity hinterland, which exports products like rice, sugar, maize, shrimps and paper products. Many leading agricultural companies have set up their processing centres in the region, said an official release.

Singapore’s PSA International Pte Ltd, the world’s top container terminal operator by volume, plans to set up a container loading facility at Kakinada port in Andhra Pradesh as it looks to expand its presence in Asia’s third-largest economy, two people briefed on the matter said. “PSA has signed a memorandum of understanding with Kakinada Seaports Ltd (the company that operates Kakinada port) for operating a container terminal at the port,” a Mumbai-based port consultant, one of the two people, said, asking not to be named. PSA International is owned by Temasek Holdings Pte Ltd, the investment fund owned by the government of Singapore. Kakinada port is located between Visakhapatnam and Chennai ports. Kakinada Infrastructure Holdings Pvt. Ltd is the majority stakeholder in Kakinada Seaports. The port, constructed by the Andhra Pradesh government in 1997, was privatized in 1999. Kakinada port has the freedom to set rates because it is a port outside the control of the Union government. In comparison, the 12 ports owned by the Union government are regulated by the Tariff Authority for Major Ports (TAMP). PSA and Kakinada Seaports did not respond to emails sent on Wednesday seeking comments. Kakinada port loaded 17.961 million tonnes (mt) of cargo in the year ended March 2015.