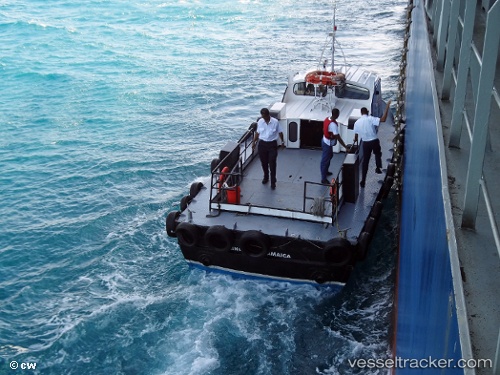 Kingston Freeport Terminal Limited says the Port of Kingston is now able to accommodate the extra large container ships with the completion of upgrades on section one of the Kingston Container Terminal. Kingston Freeport says the upgrading, along with the completion of dredging to deepen the shipping channel, makes it possible for Jamaica to accept calls from vessels with capacities up to 14,000 20-foot equivalent units (TEU). The company, which manages the Kingston Container Terminal under a 30-year concession agreement, says it will now move to complete section two of the upgrade on the south terminal by the end of this year at a cost of US$150 million. The port operator says these upgrades, together with the acquisition of new gantry cranes and cargo handling equipment, will position Jamaica to benefit from increased transhipment business.source : Jamaica Gleaner

Chalk-white dust was in abundance, leaving its mark on socks and shoes as high-profile visitors and journalists walked the pier at Port Kaiser, a few miles south of here on Friday. The dust was residue from 35,000 tonnes of alumina being loaded on to the Hong Kong-registered cargo ship Wuchow which will sail early this week for China. It is the first such shipment since new Chinese owners JISCO (Jiquan Iron and Steel) resumed alumina production at the 48-year-old Alpart plant in mid-year. Alumina — processed from bauxite ore plentiful in much of central Jamaica — is a white, granular material from which the light metal aluminium, is smelted in the world’s industrialised countries. Aliminium is used in the manufacturing of an array of products ranging from food wrapping to kitchen utensils, cars, and aeroplanes. Often referred to in industry circles as ‘white gold’, alumina has not been shipped from Port Kaiser since 2009, when Alpart was closed by previous Russian owners UC Rusal. Closure of Alpart was part of the fallout from the global financial crisis of that time which left the metals industry reeling, even as oil prices soared. http://www.hellenicshippingnews.com/bright-prospects-seen-as-first-shipment-of-alumina-leaves-port-kaiser/

For almost the entire month of August, vessel interests using the Kingston Freeport Terminal Ltd (KFTL) container transshipment hub in Jamaica have suffered lengthy turnaround delays due to problems in transitioning to a new terminal operating system (TOS). Mainline and feeder schedules have been disrupted, subsequent arrival windows have been missed and ships have been forced to speed up and spend more on fuel, services have been diverted to other hubs, and customer confidence in KFTL – an entity majority owned by CMA CG – has been shaken. The question now being asked by terminal users is whether current problems, which are not yet fully resolved, represent a one-off event or an ominous sign of things to come.