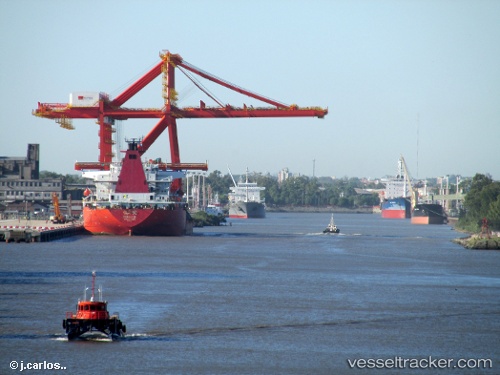 The province of Buenos Aires on Tuesday formally inaugurated the $450 million-dollar first stage of the Tecplata container terminal of the port of La Plata, the provincial capital city, Argentina’s largest port investment in half a century. The inauguration was headed by Daniel Scioli, the Peronist province governor seeking to succeed fellow-Peronist Cristina Fernández de Kirchner in 2015. Tecplata is wholly owned by ICTSI (International Container Terminal Services, Inc.), from the Philippines. On Tuesday, Dec. 30, the terminal received a feeder container ship as a pilot test on its 600-metre long dock. With two dolphins, the dock has a total length of 660 metres. The facilities also include four Chinese-made state-of-the-art portico cranes worth US$10 million each, and nine RPGs or trastainers, also made in China, worth US$1.5 million each, Tecplata General Manager Eduardo Zabalza told the Herald.