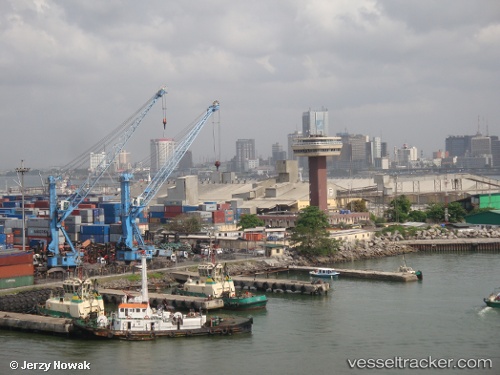 Dockworkers action to shut 34 vessels out of Lagos ports

About 34 vessels expected at seaports across the country, particularly in Lagos, may be impeded by dockworkers’ strike.This was contained in the Shipping Position issued yesterday by the Nigerian Ports Authority (NPA). It revealed that many of the vessels are conveying Premium Motor Spirit (PMS) otherwise called petrol, Automated Gas Oil (AGO) or diesel, and general cargo goods, as well as sugar and wheat. The vessels, slated to arrive Lagos pilotage district from today to the end of the month might be in jeopardy, as dockworkers have endorsed the strike and are ready to shut the ports from business activities.However, four vessels that are waiting to be berthed and eight motor tankers that have already arrived the ports might be affected by the industrial action.

At least 30,000 metric tons of cocoa are trapped on their way to ports in Nigeria’s main city of Lagos as roads in a state of disrepair delay access to ships, the cocoa exporters body said. Travel to the Apapa and Tin Can Island ports that previously took hours, now takes as much as four weeks as trucks struggle through cratered and water-logged roads to get there, Pius Ayodele, president of the Cocoa Exporters Association of Nigeria, said. The affected cargoes are either in traffic jams or stored in transit warehouses in Lagos. “A greater part of this travel time is spent at the epicenter of the congestion which is just 6 kilometers (3.7 miles) to the ports,” Ayodele said by phone from the southwestern cocoa-trading center of Akure.

Apapa ports are most expensive globally

Globally, the cost to ship cargo or freight by a shipping container from the United States to Apapa (Nigeria) is about the highest in the world. This is according to moverdb.com in a 2018 Overseas Cargo and Freight Costs template showing freight costs from United States (Los Angeles & New York) to different port destinations of the world. The rates which are as accurate as of early 2017 shows that the Apapa port from New York is the most expensive destination among the countries included in the template. It costs about $4,982 to ship a 20 feet container from New York to Apapa which is about twice the amount to ship a container of the same size to Cape Town (South Africa) – $2,542. Shipping a 40 feet container from New York to Apapa has a freight cost of about $7,436 almost double the cost of shipping a container of an exact size to Cape Town ($3,795). Although shipping costs from Los Angeles to Apapa is a bit cheaper, the freight costs to Nigeria is the second highest globally which is about $3,027, a little behind the most expensive freight cost of $3,573 to Saudi Arabia for a 20 feet container. https://www.hellenicshippingnews.com/apapa-ports-are-most-expensive-globally/