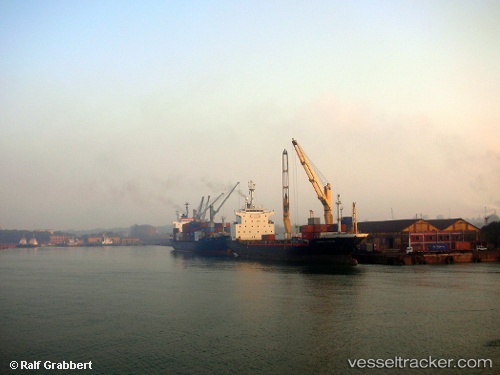 Kochi, Feb 5 -- Truck drivers at the New Mangalore Port Trust (NMPT) have been on an indefinite strike, since Jan 29, demanding implementation of labour laws by shipping companies engaged in cargo movement at the port. These truck drivers are led by the All India Port Workers Federation (AIPWF), which is affiliated to the All India Central Council of Trade Unions (AICCTU). Operations at the New Mangalore Port, the only major port in Karnataka, came almost entirely to a halt. Although the truck drivers carry out the operations and activities of the New Mangalore Port, the vast majority of them have not been employed directly by the NMPT, but rather by shipping companies as well as stevedoring agents and C&F (Clearing and Forwarding) agents. This is keeping in line with the drastic reduction in the number of truck drivers directly employed by Port Trusts across the country since the neoliberal restructuring of the Indian economy in the early 1990s.

Last cruise vessel of the season calls at NMPT

MV AIDA Bella, a cruise ship owned by AIDA Cruises of Germany with over 1,800 passengers on board, called at the New Mangalore Port here on Sunday. The vessel will be the last cruise ship calling at NMPT this season, which started in October 2016.It was visiting Goa, Mangaluru, and Kochi carrying tourists, majority of whom were from Germany. NMPT has handled 28 cruise vessels and 30,000 passengers between October 2016 and April 2017. http://www.thehindu.com/todays-paper/tp-national/tp-karnataka/last-cruise-vessel-of-the-season-calls-at-nmpt/article18349717.ece

India's SCI to Sail to Iran after 4 years pause

India's biggest shipping company Shipping Corporation of India (SCI) will resume sailing to Iran this month after a hiatus of about four years, reports Reuters. The company says it will accordingly use one of its Suezmax-sized tankers to ship an oil cargo for state-refiner Hindustan Petroleum Corp Ltd (HPCL) from Iran. "It is not yet decided ... which SCI-owned vessel is going to Iran," said SCI Chairman B.B. Sinha. SCI stopped sailing to Iran in 2012 when sanctions targeting Iran's nuclear programme prevented the company obtaining insurance cover for oil and other shipments. SCI had contracts with HPCL, Bharat Petroleum Corp (BPCL) and Mangalore Refinery and Petrochemicals Ltd to ship crude from Iran, he said. http://www.marinelink.com/news/indias-sail-iran412217.aspx