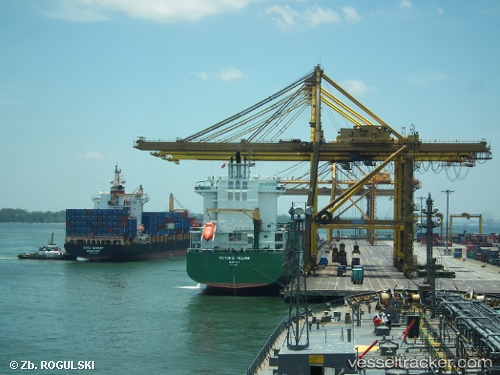 It will cost about RM5 million ($1.6 million) to clean up the oil slick in the Pasir Gudang waters off Johor, and the owners of the two container ships involved in the spill will have to foot the bill. Johor Port Authority general manager Muhammad Razif Ahmad said about 100 personnel from 10 agencies were involved in the clean-up that started on Wednesday, a day after the two vessels collided at Johor Port in Pasir Gudang. "Based on our observations, the spilled oil is unlikely to spread from where it is floating now," Mr Razif told a press conference at the Johor Department of Environment headquarters on Thursday. He said the owners of the ships would have to bear the cost of cleaning the sea and shoreline areas. http://www.tnp.sg/news/singapore/ship-owners-pay-16m-oil-slick-clean

Wan Hai Lines is about to boost its Straits – Japan ‘New Super 3′ service (#905) with the addition of four ports and the deployment of an additional vessel to maintain to weekly frequency of the service, despite the extended turnaround time. Sailing from Tokyo on 23 July, the 2,646 teu WAN HAI 313 will make inaugural calls at Osaka on 27 July, Keelung on 30 July, Pasir Gudang on 8 August and Singapore on 11 August. read full story at: http://linervision.wordpress.com/2013/07/12/wan-hai-adds-ports-to-new-super-3/