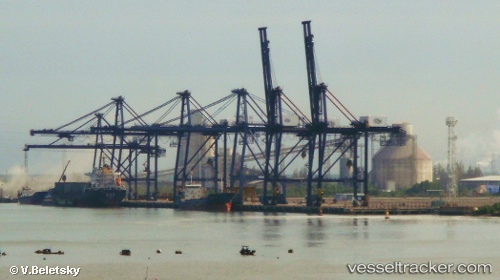 Cai Mep International Terminal (CMIT) has welcomed Grete Maersk, the 1st ship of Maersk Line's Trans-pacific String, on its route from Asia to North America. With this first direct ‘Trans-pacific 6’ (TP6) vessel, weighing at 115,700 dwt and with a capacity of 9038 TEU, calling CMIT, Maersk Line has officially become a business partner of its sister company, APM Terminals, one of the three main investors in CMIT. This move tightens the relationship between the carrier and port operator and benefits their import-export customers. CMIT offers Maersk Line a 14-meter channel depth with 16.5-meter depth alongside, state-of- the-art shipside and shoreside handling facilities and over 36 hectares of container yard. more at: http://tuoitrenews.vn/cmlink/tuoitrenews/business/cai-mep-port-welcomes-1st-maersk-line-s-container-ship-1.41468

Border guards in the southern province of Tra Vinh have discovered a ship containing military weapons at the bottom of the sea more than 20 nautical miles from Dinh An seaport. The steel, 200m-long and 40m-wide ship, contained many artillery shells and guns. The ship is believed to have sunk while transferring weapons from the North to the South during the anti-American resistance war, according to provincial border guards. — VNS