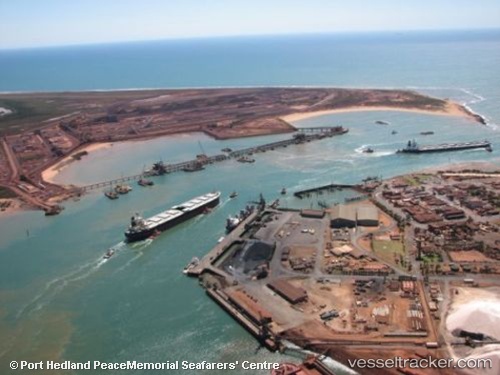 KOTUG celebrates start of operations for Fortescue in Port Hedland

With the successful start an important milestone has been reached in the execution of the contract to operate the tugboat fleet for Fortescue Metals Group (Fortescue) in Port Hedland, the world’s largest bulk export port on Australia´s west coast. The fleet consists of eight new ART 85-32W and one RT80-32 Rotortugs®. Six of them are Fortescue owned, three are owned by KOTUG, which are chartered directly to Fortescue. KOTUG manages the entire contract.

Australia’s weather bureau on Jan 12 has cut the forecast strength of a cyclone bearing down on the continent’s far northwest on Friday and dropped its warning for high winds at iron ore terminal Port Hedland. Cyclone Joyce, a Category 1 storm, is holding just off the beaches of Pilbara iron ore belt, prompting the overnight closure of the world’s biggest iron ore export terminal at Port Hedland, 1,700 km (1,050 miles) north of Perth, as a safety precaution. “Port Hedland has been taken out of warning status, with winds easing as Joyce moves inland,” the weather bureau said in a tweet. The port accounts for over half of Australia’s iron ore exports, handling more than a million tonnes a day from the Pilbara iron belt, the majority bound for Chinese steel mills.