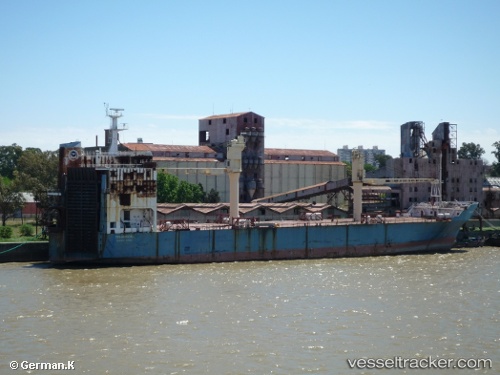 BUENOS AIRES, Aug 7 (Reuters) - Large grain transport ships using Argentine’s port hub of Rosario have had to reduce their cargo by between 3,200 and 4,300 tonnes because of an unusually low water level in the Parana River, the Rosario grains exchange said on Tuesday. The Parana River is used to transport approximately 80 percent of Argentina’s agricultural and agroindustrial exports to international markets, but a drought at its origin in southern Brazil has seen its level drop by up to half a metre. Argentina is the world’s biggest exporter of soyflour and soybean oil, the third largest exporter of corn and also a major global wheat producer. The exchange said the reduced cargoes impacted freight rates and forced ships to top-up their cargo in areas where merchandise was scarce or more expensive.

Grains inspectors and crushers called a 48-hour strike at Argentina’s main port on Thursday, Dec. 28, 2017, citing safety concerns after a worker was killed in an explosion, said Guillermo Wade, manager of the Chamber of Port and Maritime Activities. The work stoppage includes workers at the port facilities of Timbues, San Lorenzo and General San Martin, where the blast occurred at a facility owned by China’s COFCO International on Wednesday. COFCO said it was investigating the cause of the explosion, and had shut down the affected area. The strike was announced late on Wednesday by the URGARA labor union, which represents grains and oilseed inspectors. Argentina is the world’s top exporter of soymeal livestock feed and a major supplier of corn and raw soybeans. Some 80 percent of Argentina’s agricultural exports are sent from Rosario. Cargo ships loaded at the hub sail down the Parana River on their way to the shipping lanes of the South Atlantic. Source: Reuters

Argentina will cut the cost of docking services in the ports of Rosario, the country’s main agricultural hub, by 70 percent when it implements a maximum rate for entry and exit guide services in December, an official told Reuters on Wednesday. The official decision is part of President Mauricio Macri’s crusade to lower the costs of producing and exporting grains to boost economic growth in the world’s No. 3 soy and corn exporter. “By the end of December, we will make the final ruling to apply the maximum rate for navigation services, which we understand will be 30 percent of the current rates,” said Jorge Metz, national undersecretary of ports and waterways in the country’s Transportation Ministry. The cost of docking services in Rosario, the point of departure for 80 percent of Argentina’s agricultural exports, is about $108,000 per vessel, according to Metz. That figure represents about 30 percent of the port costs attached to the roughly 2,500 cargo ships that travel to Rosario annually, Metz said, adding that the ministry has the authority to regulate the rate, thanks to a decree issued earlier this month.