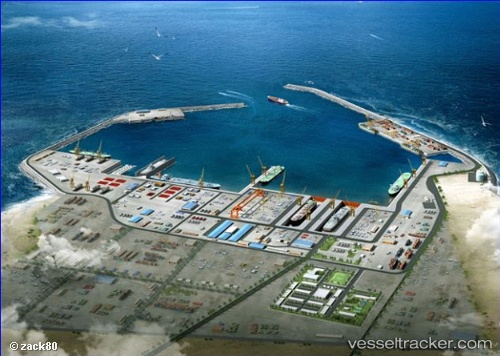 After the inauguration of Hamad Port last month, Al Ruwais Port is likely to become operational as commercial port this year and will also house a market to sell products from neighbouring countries. Currently, the Ministry of Transport and Communications is working on the second phase of Al Ruwais Port in the north of Qatar. An official yearly-brief of 2016 on the performance of the Ministry of Transport and Communications has revealed this. “The ministry is currently working on completing the second phase of developing Al Ruwais Port. The process, scheduled to take less than a year, will see the capacity of the port expanded,” the document says, adding that a new storage facility would be built and a market would be established at the port to sell products of neighboring countries. http://www.hellenicshippingnews.com/al-ruwais-port-likely-to-become-operational-this-year/

The Al Ruwais port received the first barge, Az Kunming, with a cargo of 14,700 tonnes of gabbro. This comes as part of the first phase of operations at the port, Qatar Ports Management Company (Mwani Qatar) has said. Az Kunming is a high-submersible barge that has a length of 114m, width of 31m and depth of 5.5m. It docked at the port from 11am until 3.35pm yesterday. The docking process was carried out with the help of towing vessel Victoria TUG, which is 30.14m long and 9.20m wide . Smooth docking operations form part of the Ministry of Transport and Communications’ plans to develop the Al Ruwais port, according to a statement. Currently, navigation and other operations are being carried out efficiently at the port and there is heightened activity to implement the plans.

Qatari Al Ruwais port to be opened in 3 months

The Al Ruwais port will be opened within three months after finalising development works there, local Arabic daily Arrayah has reported, quoting officials from the Fisheries Department in the Ministry of Environment. The officials stressed that work is under way to open the port, which will include storehouses of different sizes for fishermen, a restaurant, toilets and a yard to prepare fishing gear. Meanwhile, talks are on between the department and Public Works Authority (Ashghal) to expand and develop the ports at Al Wakrah and Al Khor and equip them with the required infrastructure.