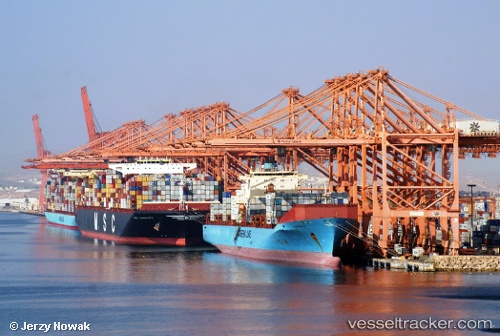 Last month, an investment of USD 31 million in asset replacement and capacity improvements over the past year at the Port of Salalah paid off. The Port recorded the highest productivity ever achieved in the region, APM Terminals said in its release. The Port of Salalah is Oman’s major regional gateway port and transshipment hub, located on the Arabian Sea. With an annual capacity of around 5 million TEU, the port set a new productivity record this month, delivering 412.97 Port Moves per Hour (PMPH) on vessel Cap San Tainaro. The Port handled 3,820 moves in a port stay of 9.25 hours.

The Port of Salalah, Oman’s major regional gateway port and transshipment hub on the Arabian Sea, set another record in productivity with a delivering 412.97 Port Moves per Hour (PMPH) on vessel Cap San Tainaro handling 3,820 moves in a port stay of 9.25 hours. This is the highest productivity delivered by any port in the region till date.

Port of Salalah announced the resumption of gradual operations in the cargo terminal after completion of the assessment of damages caused by Cyclone Mekunu in Dhofar. Mohammed bin Ofait al Ma’shani, director general, corporate affairs, Port of Salalah said the first container ship is expected to arrive on Friday. He added that the port management is working to ensure that all facilities are in place to start normal services. In a statement, the Ministry of Defence (MoD) said that a hydrographic survey of the port area was conducted by the Royal Navy of Oman’s Diving Team. “This was done to facilitate the movement of vessels in the port area. It was held as part of the efforts and services provided by us and the Sultan’s Armed Forces to support other sectors in the Governorate of Dhofar,” MoD said. Source: Muscat Daily