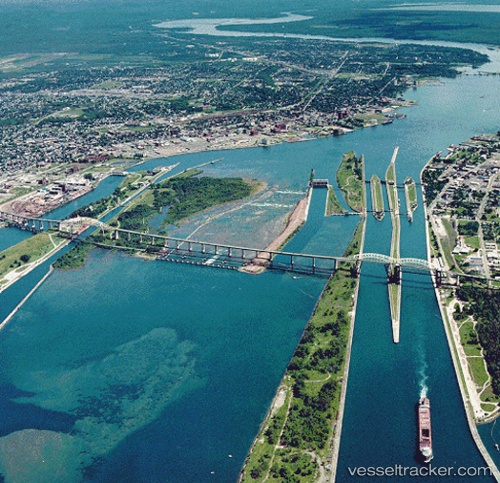 The Sault Ste. Marie locks will reopen on March 25. It typically handles more than 80 million tons of cargo in a season, about 80 percent of which transits the Poe Lock.

At 12:01 a.m. on March 26, the U.S. Army Corps of Engineers officially opened the Soo Locks for the start of the 2016 shipping season. The locks at Sault Ste. Marie, Michigan are among 16 locks that form the Great Lakes St. Lawrence Seaway navigation system which extends from Duluth, Minnesota to the Atlantic Ocean. Together these 16 locks lift or lower ships 600 feet – the height of a 60 story building. Since the Soo Locks closed in January, the Corps has been busy executing winter maintenance, repair and rehabilitation projects. Projects included the installation of a hydraulic system for the Poe Lock; anchorage repairs and dewatering bulkhead coating replacement on the Poe Lock; and work on the MacArthur Lock’s electrical modernization. These improvements ensure the reliability of the waterway, and the safety of the vessels and crews who will transit the locks over the next nine months. http://www.maritimeprofessional.com/news/locks-open-2016-287116

U.S.-flag Great Lake carriers are using a recent 20-day closer of a lock at the Soo Locks in Sault Ste. Marie, Michigan to highlight the need for a second lock large enough to accommodate the largest ships servicing the Great Lakes region. According to the Lake Carriers’ Association, representing the 16 American companies that operate 56 U.S.-flag vessels on the Great Lakes, the MacArthur Lock was closed from July 29th until August 17 due to a misalignment of the miter gates that forced the U.S. Army Corps of Engineers to take the Lock out of service. The 20-day closure ended up costing Great Lakes vessel operators nearly $250,000 and impacted a total of 77 voyages, causing the delay of 1.8 million tons of cargo, according to the Lake Carriers’ Association. The MacArthur Lock is one of four locks connecting Lake Superior and Lake Huron at the Soo Locks. While the MacArthur lock is large enough to handle smaller ocean-going vessels, the Poe Lock is the only one one of the Soo Locks that is big enough to handle the largest lake freighters of 1,000 feet or more. http://gcaptain.com/soo-locks-closer-shows-need-for-second-large-lock-great-lakes-carriers-say/#.VgeYPt-vG9I