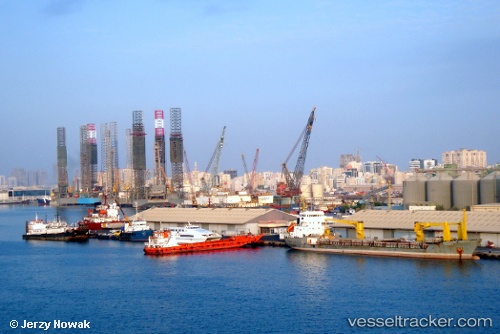 SHARJAH // Work has begun to refloat several cargo ships that ran aground in a storm last week in which at least three sailors died. Five vessels were washed up on the coasts of Sharjah and Umm Al Quwain. On Sunday, one cargo ship was being floated at Al Hamriya beach after running aground off Sharjah in bad weather. Another vessel sank in the storm, claiming the lives of at least three Indian sailors, whose bodies were recovered from the sea. Two crewmen were rescued by coastguards and five were helped from the sinking ship. Two others in the 12-man crew remain unaccounted for. Municipality teams and representatives of the company managing one of the other ships are now working on manoeuvring the ship towards the sea to allow tugs to pull it into deeper water to float it. Capt Sanjay Prasher flew in from India to manage the operations to refloat the vessel. "The ship has 18 crew members from India, they have not been harmed or injured during the bad weather. They have been on the ship since it ran aground," said Capt Prasher. Hawsers from the tugs were attached to the ship and one of the grounded vessel’s anchors raised while the other was dropped to maintain stability as the tugs turned its bow. Report with photo on http://www.thenational.ae/uae/work-begins-to-refloat-cargo-ships-that-ran-aground-in-sharjah-during-storm

A ship has sunken off the coast of Sharjah, with the police managing to rescue six members of the vessel's seven-member crew. One crew member is still missing, while the ship's captain is recuperating in a Sharjah hospital. The crew is comprised of five Indians and two Iranians. The missing crew member is an Indian national, the police said. The others were rescued by the Sharjah Police's rescue unit and coast guards. The captain of the ship, a 39-year-old Iranian who suffered serious injuries, was rushed to Al Kuwaiti Hospital, where he is recuperating in the intensive care unit. The police said the incident occurred on Thursday when the ship was trying to reach Khalid Port. The ship sank due to bad weather and high waves. The police rushed to the area after receiving information and dispatched a rescue unit which plucked the crew and provided treatment. The team also pulled the ship to the shore. The Sharjah Police have launched an investigation. http://www.khaleejtimes.com/nation/general/1-missing-6-rescued-as-ship-sinks-off-sharjah

United Arab Emirates (UAE)-based Gulf Petrochem Group (Gulf Petrochem) has announced the opening of a new liquid natural gas (LNG) terminal in the Hamriyah Free Zone (HFZ) on October 29. The "state of the art" terminal is reported to have a total capacity of 203,888 cubic metres (cbm), with 37 tanks ranging from 1,700 to 11,200 cbm. Gulf Petrochem says the facility is intended provide storage capacity needed for the increasing demand in the region, and will also be able to store numerous grades of petroleum products, including fuel oil, gas oil, base oil, bitumen, and naptha. "Our storage terminal business has become an integral and significant business unit for the Group," said BM Bansal, a Gulf Petrochem board member. http://shipandbunker.com/news/emea/440787-gulf-petrochem-opens-new-al-hamriya-lng-terminal