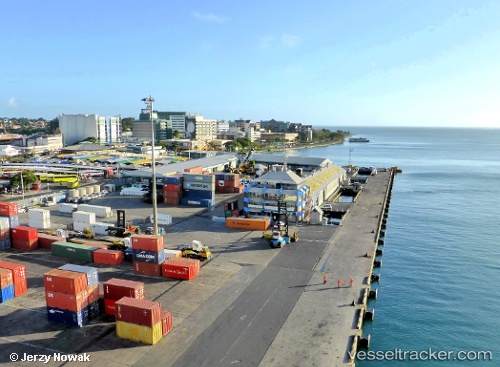 A container ship, Southern Phoenix is sinking in the Suva harbour in Fiji. Fiji Village reports only a small portion of the ship was visible from the Suva Wharf. More than 10 cargo containers are also floating in the water just behind a movie complex. There are more cargo containers loaded in the half-submerged ship and there is a fear that these containers may also end up floating in the water. "Cargo containers were being loaded on the ship when the load became unbalanced and the ship tilted on one side," according to Fiji Police. The ship was later towed out of port area by the marine tug boats. Fiji Village reports that the details about the contents inside the cargo containers are unknown at this stage. Report with some pictures at http://www.radionz.co.nz/international/pacific-news/330212/containers-floating-in-fiji-harbour-after-ship-sinks

Six Tongan crewmen are reported to be well and have been taken to land after the vessel they were on, MV Sitka became stuck on a reef in Kadavu Island, Fiji in the weekend, due to mechanical problems. Tonga Police confirmed this afternoon that Tonga Coastal Radio on Sunday, 21 August received a distress call from the vessel after it got stuck on the reef near Kadavu. There were six Tongan male crew on board including the skipper. Tonga Police contacted Fiji and were advised by the Nadi Rescue Coordination Centre that the Fiji Navy is handling the case. “We have been informed the crew are well and are being taken care of by people at Kabariki village on the island. They are expected to take a ferry to Suva on Thursday, 25 August. The men will probably return to Tonga later this week,” said a police spokesperson. It is understood the vessel is remained stuck on the reef today. Privately owned The MV Sitka is an inter-island cargo vessel that can carry 200 tonnes of general cargo. It was initially brought to Tonga on a chartered basis by a local company South Seas Shipping (SSSC) from Australia. The vessel arrived in Nuku'alofa in March 2010 and had transported cargo between Nuku’alofa, Ha’afeva, Pangai and Neiafu. Its management at this stage remains unknown. Kadavu is the fourth largest island in Fiji. http://matangitonga.to/2016/08/23/tongan-vessel-stuck-reef-fiji

The captain of one of the international regular ships to our shores has called for the introduction of a Vessel Traffic System. Pacific Islander II Captain Michael Flores made these comments after his ship sounded its whistle several times at a boat believed to be fishing at the entrance of Suva Harbour. Captain Flores said: “I think in Fiji ports communication is good, light is good but think there should be a VTS. “The harbour control must monitor also the passage. At times there are a lot of fishing boats which becomes very hard for us to detect at entrance.” Harbour control and services is looked after by the Harbour Master which falls under the jurisdiction of Fiji Ports Corporation Limited. Captain Flores said while the boat was alerted within the nick-of-time it could have fatal had the crew members not detected the boat on the 17134-tonne multi-purpose vessel. “You don’t have enough space to maneuver, the two sides are shallow water, reefs. “But the fishing boats, the fishers are just staying in the middle. “Maybe if the harbour control can have a good radar control so they can monitor the area, this would help lift of profile of your port services.” http://fijisun.com.fj/2015/05/27/captain-calls-for-tighter-traffic-system/