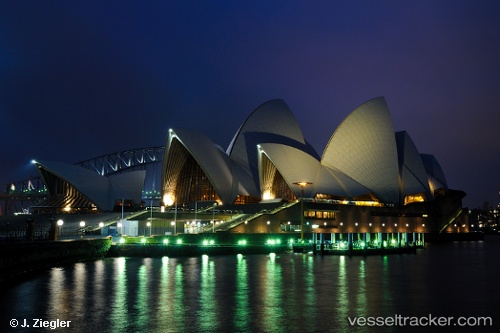 NSW Ports and Patrick Terminals have commenced work on a A$190 million project to double on-dock rail infrastructure capacity at Port Botany’s Patrick Terminals - Sydney AutoStrad in Australia. The project includes investment of A$120 million from NSW Ports to deliver on-dock rail infrastructure and A$70 million from Patrick Terminals to deliver automated rail operating equipment at the container terminal. The project will deliver capacity to handle one million TEUs on rail and improve train turn-around times by 33 percent. It will be opened in stages to allow existing rail operations at the terminal to continue throughout the construction period. Once fully operational in 2023, the project will increase rail capacity of the Patrick Terminals – Sydney AutoStrad from 250,000 to one million TEU. It is anticipated to reduce the truck kilometers travelled in Sydney by at least 10 million per year, saving over two million liters of diesel per year – the equivalent of a net reduction of more than 5,400 in CO2 emissions tonnes per year.

DP World to shed another 200 wharfies as docks dispute escalates

Australia’s biggest port operator DP World is telling dock workers that 200 jobs will be made redundant in Sydney and Melbourne as the company grapples with stalled union negotiations and growing commercial pressures. DP World Australia’s chief operating officer Andrew Adam told The Age and The Sydney Morning Herald that the company had no choice but to shed 200 staff – 100 in Melbourne (on top of 50 stevedores who will leave the business this week) and 100 in Sydney. About 1800 stevedores work at the company. “It’s a decision not taken lightly, but we’ve lost volume and market share since last year,” Mr Adam said.

DP World fires back in row with striking Australian dockworkers

DP World Australia has called for an end to the strikes at its ports this week, warning that the industrial action comes at a time when shipping lines are reviewing stevedore contracts. “The industrial action will cause significant disruption to DPWA customers and importantly the broader supply chain of shippers, exporters and importers. DPWA employees will also be unnecessarily and avoidably impacted by these lost earnings,” said Andrew Adam, chief operating officer at DPWA. DP World’s Brisbane, Sydney and Fremantle container terminals are on a rolling 48-hour strike, while workers at the company’s Melbourne operations have decided to down tools for 96 hours. The workers said in a release their actions this week are in order to fight against automation, outsourcing, cuts to income protection insurance, and “dishonest bargaining” by the company During the recent 12-week bargaining period, DP World said the local union did not make any material concessions to its initial 50 claims. These claims include a wage increase well above CPI, DP World said.