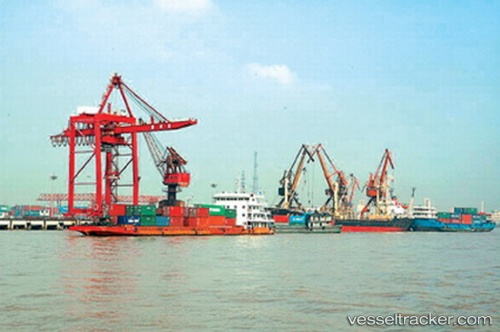 A crane collapsed during operations at Jingjiang Port’s Taihe terminal in Jiangsu yesterday, Feb. 3, 2016. The operator of the crane died after being sent to hospital. Two vessels berthing at the terminal were also suffered damaged. Authorities have commenced investigations into the incident. Jingjiang Port is a major river-to-ocean transit port on the Yangtze River, and the Taihe terminal mainly operates breakbulk cargo.

Powerful Typhoon Fitow landed in Southeast China with strong wind and heavy rain yesterday and the National Meteorological Centre has issued the highest red alert for coastal areas. Several coastal areas in the south of Zhejiang Province including Taizhou, has been hit by the typhoon, with some terminals of Taizhou Haimen port flooded. Neighboring port city Zhoushan is also evacuating people near coastal areas and Zhoushan port has stopped passenger services. In Fujian, 177,000 people have already been evacuated before the storm hit the coast. [07/10/13]

Taizhou Kouan Shipbuilding recently has penned a shipbuilding contract of two 76000dwt bulkers order from German owner MST-Mineralien Schiffahrt Spedition und Transport (Minship). The vessels will be constructed at its jv shipyard with AVIC Group, Taizhou CATIC Shipbuilding. The order is believed to be the first order received by the company this year, and the construction of the vessel will start in 2014. [08/10/12]