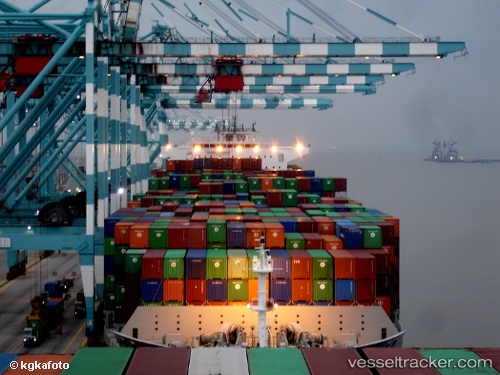 PTP makes history as 1st port to depart a vessel with final load over 19,000 TEUs

Pelabuhan Tanjung Pelepas Sdn Bhd (PTP), a member of MMC Group, became the first port in the world to depart a vessel with a final load over 19,000 twenty-foot equivalent units (TEUs). The milestone was accomplished on Aug 18 this year when Mumbai Maersk, one of Maersk’s 2nd Generation Triple-E vessels, left the port with the record load of 19,038 TEUs. PTP in a statement said the vessel, deployed on the Asia-to-Europe Service (AE5) arrived from Shanghai, China, and is now en route to Port of Rotterdam, Netherlands.

Port of Tanjung Pelepas (PTP), a Member of MMC Group is the first port in Southeast Asia (SEA) to welcome the region’s tallest ship-to-shore quay cranes at its port. The super post panama cranes, stand at a lifting height of 55.5 metres and weighing at 1,900 tonnes each. The four (4) new cranes form a part of the eight (8) cranes ordered by PTP, with the remaining four (4) cranes expected to be delivered by December. Dato’ Sri Che Khalib Mohamad Noh, Chairman of PTP said that a series of equipment refurbishment and acquisition projects, with a value of RM500 million, have been executed by PTP to enable the port to create a new, full capacity berth to cater for mega vessels. “By investing in state-of-the-art assets, we are further establishing our terminal as one of the best equipped and most technologically advanced terminal port in the region. This is to ensure that PTP progresses well with the rapid changes within the port and shipping industry and subsequently meet the growing customer demand.” he added.

Cargotec, Kalmar, is to start delivering the first batch of 93 terminal tractors for handling containers, worth EUR5 million (US$5.2 million), to its established customer, the Port of Tanjung Pelepas (PTP) in Malaysia The order, the largest of its kind to date in Malaysia for terminal tractors, was booked in Cargotec's 2016 third quarter order intake, with first deliveries taking place in December 2016, the company said in a statement. PTP is Malaysia's largest container terminal and the facility has continued to grow and expand its business in the region in spite of the gloomy global economic landscape by handling a total of 9.2 million TEU last year, an increase of 7 per cent compared to 2014. Kalmar 4x2 medium terminal tractors to be delivered to PTP are manufactured in Shanghai, China with the design and offering specially optimised for the Asian market. The PTP units have a gross combination weight of 70 tonnes and they will be used to handle containers. Said Kalmar sales support manager Colin Cen: "Our aim is to help PTP to improve the efficiency of their every move and lower their operating costs with our high-quality terminal tractors. Our factory in Shanghai is fully committed and working at full speed to deliver the ordered machines on time as promised. This is our largest terminal tractor order to date in Malaysia. Source : Schednet