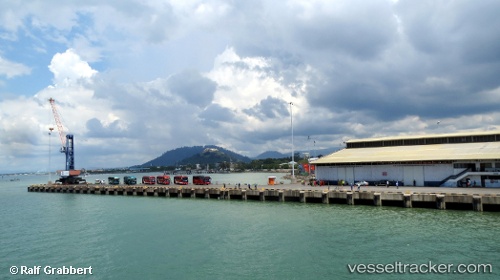 Four reachstackers and three empty container handlers (ECH) for container handling operations have arrived at the Sapangar Bay Container Port (SBCP), Tawau Port and Sandakan Port. Sabah Ports Sdn Bhd (SPSB) said in a stab tement yesterday that these equipment, used for transporting and stacking of containers, are essential in yard side operations so as to enhance the operational efficiency at these ports. Two reachstackers and two ECH are each assigned to SBCP. Tawau Port will receive one unit each whilst Sandakan Port will receive one reachstacker to complement the existing equipment at their respective ports. As part of its 30-year master plan to strengthen port performance via improved yard side operations, SPSB conducts periodic reviews of the performance of its cargo handling equipment and procures new equipment that are due for replacement.

KOTA KINABALU: A man was killed and two others were hospitalised after they inhaled poisonous gas while fixing a hole in a ship in Tawau. Tsen Gaw Min, 29, was with his work mates trying to mend a hole in the ship when the incident happened at 3pm Tuesday. Tawau Fire and Rescue Department operations chief Faisal Ahmad said according to a report given by the victim's colleague, Tsen had gone down to the inner part of the ship to weld the hole. "The other two men were in the upper section pumping water out of the ship," he said. Faisal said the two men have been identified as Jamaludin Lalo and Adi Lalo. After a while, Tsen collapsed and fainted upon inhaling smoke and gas from the welding works. "His two friends who smelled the smoke went down to check and tried to rescue Tsen but they too fainted," Faisal said. Work mates on the deck of the ship immediately ran out and called the authorities. The three victims were brought out by firemen at about 3.40pm. http://www.thestar.com.my/news/nation/2017/05/23/man-dies-two-in-hospital-after-inhaling-poisonous-gas-in-leaking-ship/

abah Ports Sdn Bhd, the port operating subsidiary of Suria Capital Holdings Bhd, will invest RM229mil over the next two years to further improve its port facilities and equipment to better serve the port users and shipping communities in Sabah. The company added that Sabah Ports would increase its container-handling equipment fleet at Sapangar Bay Container Port (SBCP), Sandakan Port and Tawau Port. Source: The Star