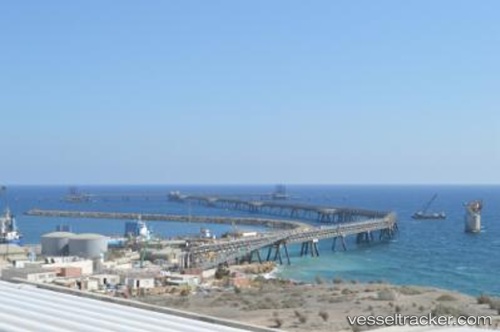 On 24th July, Damen Shipyards Group signed a contract with Cyprus-based VTS Vasiliko Terminal Services, the supplier of marine services to the Port of Vasiliko and the VTTV Oil Terminal Jetty, for a Damen ASD Tug 2310. The new ASD Tug 2310, which is to be named Ayia Marina, is a standardised vessel from the Damen portfolio, but has been enhanced with some specific custom requirements from Vasiliko Terminal Services.

THE ambitious oil storage terminal project at Vasiliko should be completed very soon, with the first shipments expected soon after, company officials told a visiting delegation of the ruling Democratic Rally (DISY) party, headed by its president Averof Neophytou yesterday. The party leader said the oil storage terminal facilities of VTT Vasiliko Ltd (VTTV) “is one of the largest investment in Cyprus today and a good solution for the transfer of oil stocks currently stored in Larnaca.” He also expressed his belief that with the increase of competition when the terminal begins operations, fuel costs will be reduced. He was accompanied by House Trade committee chairman Lefteris Chrystoforou, MPs Andreas Michaelides, Zacharias Zachariou, Efthymios Diplaros and other party executives. The visit was concluded with a tour at the jetty of the terminal on one of the company’s cutting-edge tug boats that will be used to tow tank vessels. George Papanastasiou, CEO of VTTV, said that the construction phase will be completed soon and the operations phase will begin shortly with the arrival of the first tank vessel. The project, that VTVV says will make Cyprus an oil product trading hub for international markets and will generate multiple benefits for the country’s economy, includes an oil storage terminal with 28 tanks of 544,000 cubic metres capacity and a jetty that will service over 500 tank vessels per year. VTTV is a subsidiary of VTTI, a joint venture of the Dutch energy giant Vitol and MISC, a major shipping company owned by the Malaysian state oil company Petronas. Source: Cyprus Mail

The first fuel tanker is expected to dock at VTT Vasiliko Terminal in mid November, marking the operation of a project that aspires to place Cyprus at the centre of the fuel transport routes. With a total cost of €405 million the project is considered as one of the biggest foreign direct investments in Cyprus in recent years. Τhe state-of-the-art terminal features 28 tanks with a total storage capacity of 543,000 cubic metres of core fuel (diesel, gasoline and jet fuel) a deep water marine jetty as well as road tanker loading facilities in phase one, already completed at a cost of €305 million. Phase two, scheduled to begin in mid 2015 will create an additional 13 tanks and an extra capacity of 305,000 cubic metres at a cost of €105 million. VTT Vasiliko Ltd (VTTV) was founded in 2010 and is a subsidiary of VTTI B.V., the international company that owns and operates oil storage terminals, 50 per cent of which is owned by Dutch-owned Vitol. VTTV, the company operating the terminal, believes that the facility, located in Vasilikos, in the island`s southern coast, is very attractive to operators as in the wider area there are oil product flows from the Black Sea to the East, from the East to the West and from Europe to the East Med and the Red Sea, as 250 trans-shipments per year take place in the open sea around Cyprus.