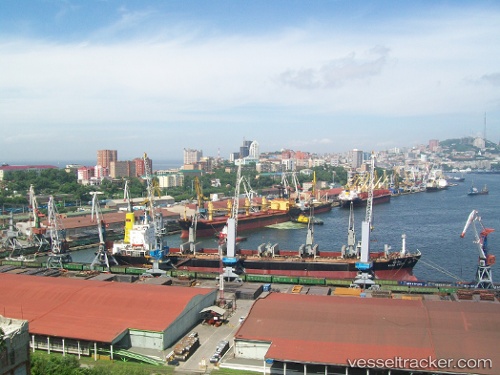 The typhoon Maysak crushed onto the port of Vladivostok on Sep 3, 2020, wreaking havoc at the Navy base and in the commercial port. A floating dock in the base broke off her moorings, drifted along the piers and hit berthed submarines and other ships. The amount of damage was yet unknown. The container terminal at the ommercial port was flooded. Video: https://www.youtube.com/watch?time_continue=50&v=Yr8JHgunKNY&feature=emb_title

Ice breaking season kicked off in the Port of Vladivostok basin as of Dec. 29

Due to heavy ice formation within the boundaries of the Port of Vladivostok encompassing Amur Bay, Zolotoy Rog Bay, Diomid Bay, Bukhta Uliss, Eastern Bosphorus strait and the bays of Russky Island the Vladivostok Harbourmaster Alexander Vanyukov announced the beginning of ice-breaking season as from 00:00 (Local time) December 29, 2017. According to his order, the Port State Control officers at the seaport of Vladivostok will oversee and grant permission to enter the port and sail only to ships having Ice2 class. The assistance will be provided to ships under owners requests and at their expense by icebreaking vessels with ice class not below Arc4.

The prospects of large cruise ships’ calls at the port of Vladivostok were discussed at the meeting headed by Vasily Usoltsev, First Deputy to the Primorsky Territory Governor. According to the press center of the regional government, dredging at the two berths of Vladivostok (No 1 and No 2) will let the port accommodate large cruise liners sailing in the North East Asia from the next cruise season. As of today, the fleet of cruise companies operating in the North East Asia consists of cruise ships of the fourth generation, Ovation or Quantum type. The largest ship, which is 348 meter long can accommodate almost 5,000 passengers. As Valery Nagorny, Director General of Vladivostok Sea Terminal LLC, said at the meeting, the interest to calling at the port of Vladivostok was expressed not only by Russian companies. http://en.portnews.ru/news/244293/