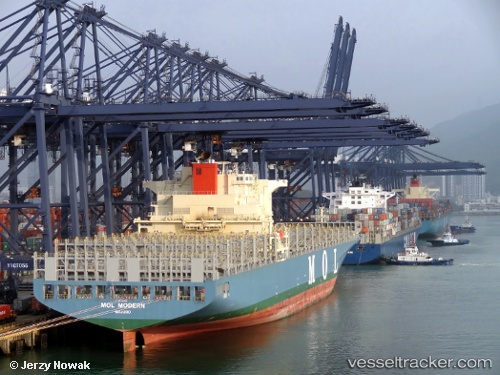 Todays problem with Maersk's 18,000-TEUers is that there are only two ports in the world - Shenzhen's Yantian terminal and Malaysia's Tanjung Pelepas - that can handle them fully loaded, but still not one port in Europe. "We can fill ships at Tanjung Pelepas but the problem is that we cannot take the goods off in Europe," said Maersk Asia-Pacific chief Thomas Riber Knudsen. That's why they can only load 15,00-16,000 TEU into an 18,270-TEU vessel, said Mr Knudsen, reported Lloyd's List. "Wherever we cannot operate cranes at the full height and full length, we cannot fill the ships," he said, adding that he hopes Algeciras, Shanghai and Rotterdam will be able by the end of the year. Maersk Line is due to take delivery of another seven 18,270 TEU vessels, bringing its megaship fleet to 14. Mr Knudsen said cascading would eliminate vessels smaller than 6,000 TEU. "Panamax ships are too small to operate in long-haul trades and many not small enough for feeder ports," he said. With current overcapacity, he expects rates to continue to be under pressure, though anticipates improvements in volumes this year.

Recently, China's Yantian International Container Terminals handled its 100 millionth TEU, a record it achieved in a mere 18.5 years. In less than two decades, Yantian Port has evolved from a small fishing village into one of the world’s busiest container terminals, Cargonews Asia reports.

On September 15, the main works of the extension of 3 berth in west Yantian Port passed acceptance. Launched in September 2010, the project involves a 50,000t high-piled container terminal with a width of 33.4m and a coastline of 140m. Yantian Port is one of the world’s busiest terminals, Dredgingtoday reports. The project will help to alleviate the handling capacity of Yantian Port and promote the development of the port.