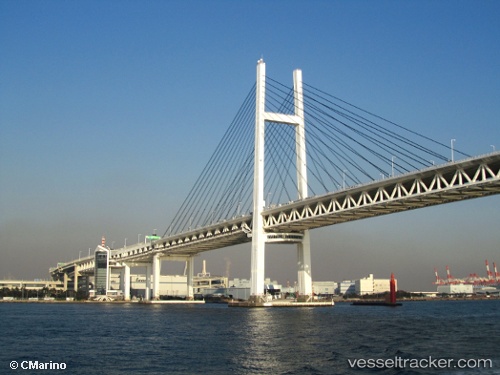 Japan’s Port of Yokohama is on track to open its new cruise terminal at Shinko Pier in mid-2019 after starting construction work in June. The port has now begun work to build the 17,400-square-metre terminal building and to extend the existing cruise pier to 340 metres in length. This, combined with the 9.5-metre depth, will enable the port to welcome cruise ships weighing up to 110,000gt.

Starting April 17, the CMA CGM subsidiary's new JTX service will sail between Japan and Singapore on a fixed day, weekly frequency, APL said in a statement. Ocean carrier APL, now a subsidiary of France's CMA CGM, is launching a new intra-Asia service dubbed “JTX,” the company said in a statement. The JTX will have a port rotation of Yokohama, Tokyo, Nagoya, Kobe, Singapore, Port Kelang and back to Yokohama, with the first sailing departing Yokohama on April 17. The service will operate on a fixed day, weekly frequency with three vessels of unknown size and a total rotation time of 21 days round. According to ocean shipping schedule and capacity database BlueWater Reporting, APL currently operates five intra-Asia services and purchases slots on five others. Four of those 10 services currently call Japan while two services currently call Singapore. Source: American Shipper

NYK participates in feasibility study for LNG bunkering in Yokohama

NYK is participating in a study launched by Japan’s Ministry of Land, Infrastructure and Transport and Tourism (MLIT) to explore the feasibility of LNG bunkering in Yokohama. This study is examining the technological and infrastructural requirements for establishment of an LNG bunkering hub at the port of Yokohama to supply LNG as fuel to ships. A kick-off meeting of the study’s steering committee was held on June 9 for the creation of a facility development plan by the end of the year. In accordance with the NYK Group’s medium-term management plan, “More Than Shipping 2018,” NYK has started the process of using LNG to fuel some ships. In August 2015, the company received delivery of Japan's first LNG-fueled tugboat named “Sakigake”. Moreover, NYK has already begun construction of the world’s first LNG-fueled car carrier and LNG bunkering vessel, and has teamed with ENGIE and the Mitsubishi Corporation to develop the LNG bunkering business. NYK looks forward to applying the company’s knowledge and know-how to this study for the development of LNG fuel for ships.