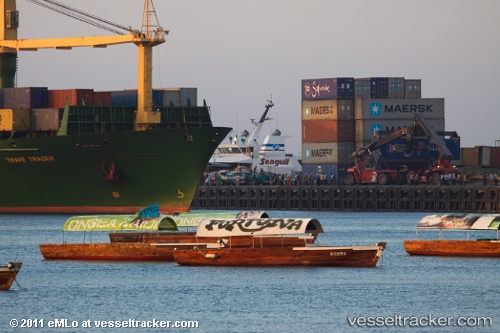 Last week, President Dr Ali Mohamed Shein (below), said China’s Exim Bank will lend $200 million for the project first mooted three years ago. He said it will be built at Mpiga-duri coastal area starting early next year. Zanzibar island is located in the Indian Ocean, about 35 kilometres off mainland Tanzania. Malindi port was built in 1925 as a modest lighter port. The wharves of the main seaport were constructed in 1989-1991 with financial assistance from the European Union. The port handles more than 90% of Zanzibar trade. In 2012, Zanzibar’s Minister for Infrastructure and Communication, Hamad Masoud Hamad told East African Business Week, “Malindi port is too congested. The Malindi Port is now incapable of handling the large number of ships which have been increasing day to day while the offloading of cargo delayed due to port’s inability. “We want the new port to double the capacity of handling bigger oil and container ships, said Hamad and added, the Malindi port doesn’t have capacity to dock more than three cargo ships at time,” he said. The Export-Import Bank of China was founded in 1994. It is a state bank solely owned by the Chinese government and under the direct leadership of the State Council. Its international credit ratings are the same as China’s sovereign ratings. Source: East African Business Week