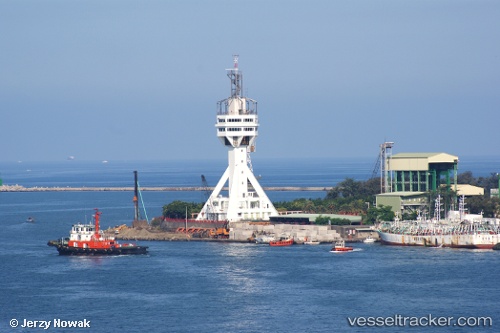 American President Lines (APL) has renewed its terminal lease at Taiwan’s Port of Kaohsiung to help it develop in Intra-Asia. The deal with Taiwan Branch and Taiwan International Ports Corporation will see APL retain its current terminal plot at the port for another 10 years from 1 January 2018 to 31 December 2027.

The typhoon Meranti with gusts of up to 227 km/h wreaked havoc in Kaohsiung Port on Sep 14, 2016. Several fishing vessels were damaged or sank. The Taiwan flagged trawler "Shun Tien 606", (MMSI-No.: 416001500) after being battered against the quay capsized and partially sank. One crew member died, 22 other fishermen from this ship and nearby fishing vessels, which were also severely damaged, have been rescued. The "Yung Hsing Fa No. 168" was blown onto a breakwater and capsized at Sizihwan. The new built container m/v "YM Wind" broke off the moorings at the CSBC Corp. Shipbuilding Yard and drifted across the bay, landing at the 6th Container Center operated by the Yang Ming Marine Transport Corp. The vessel allided with two gantry cranes, crushing them down before several tugs were able to get it under dontrol. The 153,500-gt-ship of 14,000 TEU capacity is to be delivered to 10-year charterer, Canadian Seaspan, in March-April 2017, probably delivery will be postponed due to the damages suffered. The container terminal suffered serious damages, which will hamper scheduled cargo operations. The "YM Wind" has a deadweight of 145,077 dwt, an overall length of 368m, a moulded beam of 51 m and a maximum draft of 11,20 m. At least 10 freighters anchored on the outer roads dragged anchors, but no groundings were reported so far. Several containers stacked in Kaohsiung’s Siaogang District were also blown over and toppled due to the strong winds. Reports with photos and video: http://www.maritimeherald.com/2016/container-ship-ym-wind-damaged-two-cranes-in-kaohsiun-after-moorings-brake/ http://www.seatrade-maritime.com/news/asia/typhoon-causes-14000-teu-ship-to-hit-container-terminal-snaps-moorings-of-10-ships.html

Global terminal operator DP World has signed an MoU with Taiwan International Ports Corporation (TIPC) to develop Kaohsiung Port’s Terminal 7. “The agreement marks the beginning of a joint effort to seek future business opportunities and to steer growth in Taiwan’s port infrastructure, while enhancing the country’s trade potential by establishing seamless cargo movement across its supply chain,” DP World said in a statement. To date, berth concessions in Taiwan have been steered towards shipping lines. DP World becomes the first global port operator to take a concession on the island. http://splash247.com/dp-world-takes-kaohsiung-terminal/