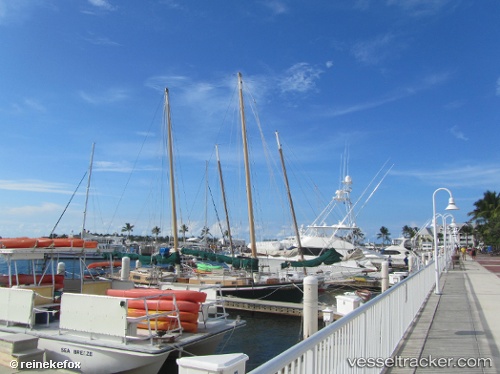 Just two weeks after Hurricane Irma touched down in the Florida Keys as a Category 4 storm, the Port of Key West has re-opened to cruise passengers -- nearly a month earlier than anticipated. Royal Caribbean's Empress of the Seas was the first cruise ship to call on Key West after the hurricane, docking on September 24 as part of a Cuba cruise. Carnival Victory followed two days later with a call on September 26 and Carnival Paradise will follow on September 27. The most impressive part of the port re-opening? It was originally slated for October 20.

U.S. Coast Guard cutters from Miami, Jacksonville and as far north as Wilmington, N.C., as well as nine ships from the Royal Bahamas Defence Force and research vessel Walton Smith have taken refuge in Key West as hurricane Matthew closes in on mainland. At least six Coast Guard cutters were moored at the U.S. Coast Guard Sector in Key West on Wednesday. On the other side of the island, nine ships from the Bahamas Defence Force, as well as a research vessel and a contract ship, took refuge at Naval Air Station Key West's Mole Pier. Since Key West is not currently in Hurricane Matthew's projected path, the Naval Air Station and the U.S. Coast Guard bases in the island have offered support to other services in the area. http://wlrn.org/post/vessels-take-refuge-key-west-hurricane-matthew-approaches-florida

Representatives of one of Norway's largest ferry operators met this week with the city of Key West's port director, as city leaders say they won't give up on the idea of landing a Key West-to-Cuba ferry. The meeting between Norled executives and Port Director Doug Bradshaw on Thursday was a courtesy meeting requested by the Norwegians, according to city spokeswoman Alyson Crean.But it's one more sign that Key West is doing what it can to once again have a ferry service to Cuba, which sits nearly 100 nautical miles away. Ferries between the two nations stopped when the countries broke off diplomatic relations half a century ago. But relations were renewed in late 2014.Norled is "considering the startup of a regular 'day cruise service' between Key West and a foreign destination, Ok-Hini Ronning wrote in a company e-mail to the city obtained by the Keynoter. The company would use a catamaran built to hold 300 passengers, the e-mail stated. Crean confirmed the meeting took place but Norled has competition. "Several companies are interested in doing a ferry service," said Mayor Craig Cates. "I know there's three. I met with two six to eight months ago.The city can eventually put out a request for proposals to find a company to run the ferry service, Cates said. But first, the city needs assurance from the federal government it would staff a new customs office here.Last November, the Key West City Commission ordered staff to figure out if the existing ferry terminal, 100 Grinnell St., could be turned into a customs facility. Such a project is estimated to cost $2 million. "Some companies have said, 'We'll pay $2 million if you give us a lease,' " Cates said.Commissioner Richard Payne has pushed the Truman Waterfront as the best location for a Cuba ferry, but the Navy closed the harbor to the public in 2013 citing the need for military training as part of its national security mission. Cates said the Navy hasn't responded to requests by city leaders to sit down and discuss reopening the harbor.source:keysnet