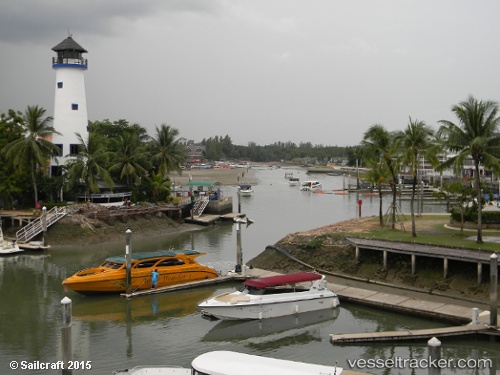 Government officials are getting excited about making Koh Samui a hub for cruise ship tourism to Thailand. Officials met with private-sector cruise ship experts while touring a ship docked off of Samui's gulf coast yesterday. The tour comes after last week's announcement by the government in Bangkok that it has approved a plan to build a cruise port on Surat Thani province's largest island. “None of the ports in Samui are deep enough to handle major cruise ships,” said Pataraporn Sithivanich, the Tourism Authority of Thailand's Executive Director for the Americas Region. “So cruise ships have to anchor about five kilometers off of the coast, meaning that it takes a while to transport tourists from the ship to land.” Ms Sithivanich said the TAT estimates the number of cruise ship passengers to Samui to increase from an estimated 1,000 to 3,000 tourists per ship annually. EAS Maritime Agencies general manager Wattana Choksuvanich said increasing cruise tourism necessitates the expansion of other infrastructure projects on the island. http://www.phuketgazette.net/thailand-news/Cruise-ship-port-Samui/65277#ad-image-0

Governor Nisit Jansomwong has announced that the proposed expansion of the deep sea port yesterday (January 22) has received Environmental Impact Assessment (EIA) approval from the Office of the National Environment Board. The approval removes the major hurdle to the expansion, which has been held up for five years. It comes just 10 days after Minister of Transport Air Chief Marshall Prajin Janthong announced government plans to turn Phuket into a yachting and cruise ship “hub for Asean”. The plan, announced previously by Wattanachai Ruangpanyalertkul, Chaophaya Terminal International Co’s Director of Songkhla and Phuket ports, provides for separate berthing for cargo and cruise ships, with a 60-metre extension using “dolphins”, bridges to connect the dolphins to the land, a cruise terminal building, basic facilities, internal roads and parking. “After this the Phuket Treasury Office [which owns the land] will organise private sector investment and assist with planning of the development. “This will benefit Phuket and support the [government] plan to make the island a yachting and cruise ship hub. In a few days, public hearings will be held in Phuket to discuss the plan,” he added. Source: The Phuket News

Phuket port to be expanded to accommodate RCCL cruise ships

he head of the Phuket, Thailand Marine Department Office is trying to kick-start stalled negotiations to expand the port to allow larger cruise ships to dock there. Represenatives from Royal Caribbean and Princess Cruises met with Thai officials on July 12 to discuss the problems encountered by large ships using their port. Located at Cape Panwa, the deep sea port has long been criticized as too small to accommodate large vessels, both cargo and passenger, for docking. According to Marine Department Region 5 chief Phuripat Theerakulpisuk, Royal Caribbean wants to see the government become more involved in lengthening the wharf and dredge the seabed. More at http://www.royalcaribbeanblog.com/2012/07/16/phuket-port-wants-expand-port-accommodate-royal-caribbean-ships