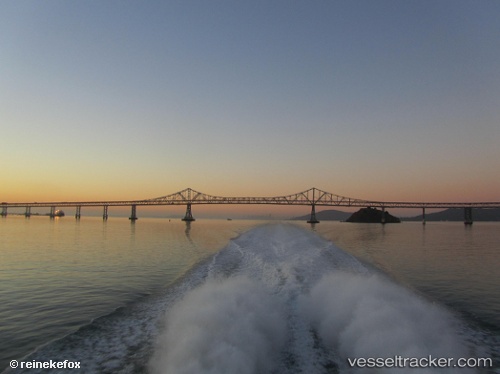 Nearly two years ago, Sandia National Laboratories researchers Joe Pratt and Lennie Klebanoff set out to answer one not-so-simple question: Is it feasible to build and operate a high-speed passenger ferry solely powered by hydrogen fuel cells? The answer is yes. The details behind that answer are in a recent report, "Feasibility of the SF-BREEZE: a Zero Emission, Hydrogen Fuel Cell High Speed Passenger Ferry." SF-BREEZE stands for San Francisco Bay Renewable Energy Electric Vessel with Zero Emissions. "The study found that it is technically possible to build a high-speed, zero-emission hydrogen-powered ferry. We also believe this can be done with full regulatory acceptance," said Pratt. "In the course of the study, we examined over 10 major issues where feasibility was initially unknown. SF-BREEZE sailed through them all," added Klebanoff. Tom Escher, president of San Francisco's Red and White Fleet, first conceived of the project when he asked if it was possible to do away with emissions altogether on one of his ferries. "This is a game changer. We can eliminate environmental pollution from ships," he said. "This could have a major impact on every shipyard in the country." Funded by the Department of Transportation's Maritime Administration and led by Sandia, the feasibility study brought together the American Bureau of Shipping (ABS), the U.S. Coast Guard, naval architect Elliott Bay Design Group, the Port of San Francisco and dozens of other contributors. Read more at: http://phys.org/news/2016-10-hydrogen-powered-passenger-ferry-san-francisco.html#jCp

First ship calls to unload automobiles and boats transforming Pier 80 from an underutilized asset to a thriving marine terminal The Port of San Francisco today welcomed Pasha Automotive Services (PAS), a subsidiary of the Pasha Group, to Pier 80 for the first ship call to unload 500 automobiles being transported by truck to Northern California dealerships. Pier 80 is the Port’s 69-acre cargo terminal in the southern waterfront. Pier 80 will employ approximately 50 longshore workers during vessel operations. “This marine terminal agreement signifies a new beginning for cargo operations at the Port of San Francisco,” said Willie Adams, who serves as President of the San Francisco Port Commission and International President of the ILWU. “We want the world’s shipping community to know that the Port of San Francisco is open for business. We also want to thank Mayor Lee for his leadership and for helping us to support working families in this community.” http://www.longshoreshippingnews.com/2016/08/port-of-san-francisco-welcomes-pasha-automotive-services-to-pier-80-2/

On Monday, Aug. 22, a ship carrying automobiles will dock in San Francisco. A cargo ship is an unusual sight for a city whose waterfront normally revolves around cruises and restaurants. But, yes, the Port of San Francisco will be handling car shipments for the foreseeable future. The Pasha Group, a San Rafael logistics company, signed a 15-year lease this year to operate a state-of-the-art shipping facility on Pier 80 that can process cars going to and from Europe, Mexico and Asia. The company plans to spend $5 million to $10 million upgrading the facility over the next few years. “We’ve already been reaching out to potential customers,” said John Pasha, senior vice president of automotive services. The question is: Will demand be strong enough? http://www.sfchronicle.com/business/article/Car-shipments-soon-coming-through-Port-of-San-9173870.php