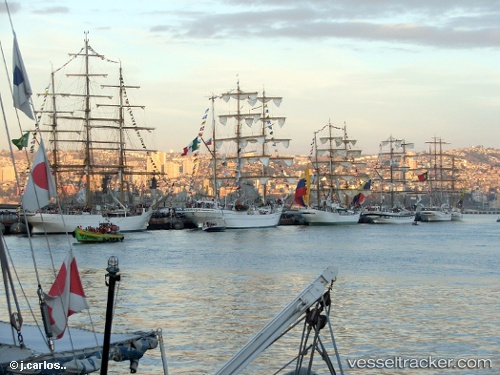 Terminal Pacífico Sur Valparaiso (TPS), a major container terminal located on the South Pacific coast of Chile, is awaiting the arrival of a new Liebherr mobile harbour crane LHM 800 and two new Liebherr ship-to-shore gantry cranes. The terminal is one of the most efficient terminals in the region, with TPS, part of Ultramar Group and Contug Terminals (MSC), working in an area of over 14 hectares composed of five berths. This results in it handling an average of one million TEUs each year. TPS decided to order a Liebherr mobile harbour crane type LHM 800 to meet the needs of their customers, especially in the peak fruit harvest season. It is due to arrive on either October 4 or 5, 2017. https://www.porttechnology.org/news/liebherr_crane_shipped_to_major_terminal_in_chile

The third South Pacific Terminal Terminal Valparaíso (TPS), the third Post-Panamax gantry crane of the "Ship to Shore" type acquired by the concessionaire, is already located at the South Pacific Terminal Pier, after successfully completing its unloading from the barge that moved it from Valdivia the week pass. According to company information, the maneuver was carried out using a self-propelled modular system, which accurately transferred the fully assembled structure from the barge to the surface of Terminal 3. TPS CEO Francesco Schiaffino, referring to the culmination of the process, said: "With this new gantry crane, which adds to the two previous ones received last year, we completed the investment plan in equipment that allows us to meet two Post-Panamax ships simultaneously, with a 740-meter Dock Front and six dock gantry cranes, so we are very pleased to continue making progress on our commitment to maintain the competitiveness of Valparaiso. " The new gantry crane, identical to the two previous ones, is of the "Ship to Shore" type. It has a lifting capacity of 65 tons and 30 movements on average per hour. It weighs almost 1,300 tons and is 107 meters high with its outstretched arm, making it the largest on the west coast of South America. With this the team begins its commissioning period, during which it will undergo a series of adjustments and tests and thus begin its operation in the coming weeks. http://www.mundomaritimo.cl/noticias/culmina-descarga-de-tercera-nueva-grua-portico-de-tps-valparaiso

SAAM S.A., the leading towage company with operations across South, Central and North America, has taken delivery of two ASD Tugs 2411 from the Damen Shipyards Group. These compact yet powerful vessels deliver over 70 tonnes of bollard pull and are exceptionally manoeuvrable and reliable. The two new tugs, named Tordo and Mirlo after Chilean birds, are now on their way to Valparaiso, Chile. Once they are fully commissioned they will begin harbour operations in the port of San Antonio. Damen will also be providing crew training and a range of other support services in their home country.