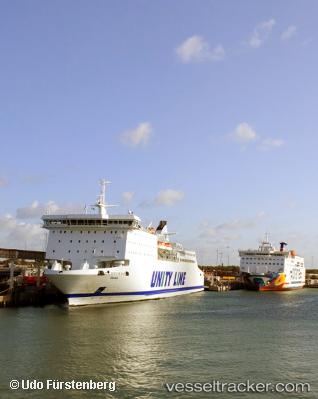 Recently, the Port of Ystad in southern Sweden played host to an event demonstrating the benefits of shore-to-ship power systems. The prime advantages are environmental. Shore power systems enable ships to connect to shore side power when docked, rather than running their own engines and gensets. This allows services such as power supply for reefer containers, lighting, heating, food preparation and cargo handling to run directly from the grid, via the port supply. Not only does this provide a significant cut in exhaust emissions in port areas, it also reduces ships’ fuel consumption. The result is a healthier environment for crew and port staff, and improved air quality in the locality of Ystad. The event was co-hosted by the Port of Ystad, shore power specialist Cavotec, power and automation conglomerate ABB, electrical systems specialist Processkontroll Elektriska, technical consultancy Grontmij, as well as Polferries and Unity Line. Ystad became, in 2012, the latest in a growing number of Swedish ports to adopt shore power connection for ships. The application at Ystad is one of the largest high voltage shore power systems anywhere. “Ports in Sweden, and around the world, are facing intensifying pressure, both in the form of legal requirements and public sentiment, to reduce emissions from ships. Our alternative maritime power (AMP) technologies enable ports and shipping lines to meet this challenge,” says Erik Chiló, Cavotec regional manager for Northern Europe. http://www.motorship.com/news101/engines-and-propulsion/swedish-ports-take-the-lead-in-shore-power

Sweden’s Port of Ystad has built a High Voltage Shore Connection (HVSC) plant to supply power to ships at berth. Construction of the plant, which is the world’s largest, was completed in August 2012. The Port of Ystad has invested around 35m SEK (US$5.3m) in the new shore facility which was officially opened on Sept. 26, 2012 by minister for the environment, Lena Ek.

ABB, the leading power and automation technology group, has won an order from Ystad Hamn, the port authority of the city of Ystad in southern Sweden, to build the complete electrical onshore infrastructure to simultaneously power multiple vessels while berthed. The shore-to-ship power solutions enable vessels docked in the port to draw all the electricity needed for operating their onboard systems, including ventilation and cooling, from the local power network. The use of shore-side power allows ships to shut off their diesel engines while docked in port. This results in reductions in greenhouse gas and noise emissions as well as vibrations, improving environmental conditions for people in and around the port. It also allows an opportunity window for maintenance work on the engines. Read more at http://www.abb.de/cawp/seitp202/b16c908eebb85120c125796000357d4c.aspx