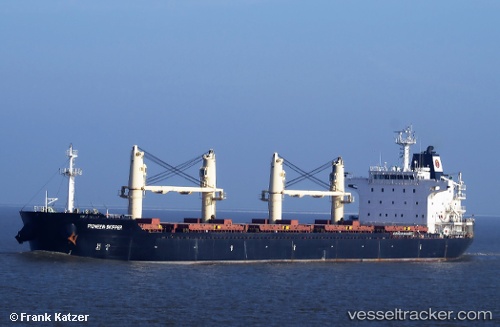 Beihai Maritime Court has ordered the detention of bulk carrier Apellis in Fangchenggang Port at the request of Zhoushan Changhong International Shipyard. Changhong International claimed that it signed a $408,000 contract with Greek owner Pyrsos Shipping for repair works on the Apellis at its yard in Zhoushan. Pyrsos Shipping has already paid $241,000 but has been unable to pay the remaining amount. In September 2015, Apellis was also detained in Australia over crew labor violations including not paying the crew according to their contracts. http://splash247.com/pyrsos-shipping-bulker-detained-in-zhoushan/

The Australian Maritime Safety Authority has detained the Panama flagged bulk carrier MV Apellis after an inspection revealed a number of deficiencies relating to the working conditions of the crew. The MV Apellis is operated by Piraeus, Greece, headquartered Pyrsos Shipping Co Ltd and chartered by Hudson Shipping Lines.All Australian registered and foreign flagged vessels within Australian waters must comply with the standards set out in the Maritime Labor Convention (MLC) of 2006. Any vessel which is found to be in breach of the MLC or other Australian standards will be detained by AMSA and repeat offenders risk being banned from Australian waters.AMSA inspected the vessel at Esperance grain jetty after receiving a complaint from the International Transport Workers Federation raising concerns about the welfare of the crew. Once on board, the AMSA surveyor discovered a number of deficiencies including: • Seafarers not being repatriated as required by their employment agreements; • Seafarers not being provided a monthly account of wages for the month of August; • One crew member found to working beyond medical restrictions; • No working washing machine in crew laundry; • Inadequate quality or nutritional value of food; • Seafarers not paid monthly as required by their employment agreements. • The vessel has been detained on the matter of non-payment of wages. The MV Apellis will remain under detention by AMSA until this deficiency is rectified. AMSA's General Manager of Ship Safety, Allan Schwartz, said that the proper treatment of seafarers is just as important as the proper maintenance of ships' equipment - a failure in either system can lead to serious accidents"All ships in Australian waters need to comply with Australian standards," Mr. Schwartz said. "Seafarers live difficult lives often spending many months at sea away from their families and friends." Source: Marinelog