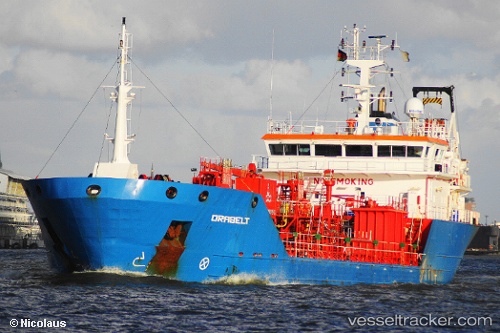 Firefighters were tackling a blaze in the engine room of the "Julia" in Kirkdale in the morning of Mar 25, 2015. People on board the ship had to be evacuated after the Merseyside Fire Rescue was called out to the ship, which was docked off Regent Road, just after 6 a.m. An electrical generator was on fire, and firefighters checked the fire has not spread. Five fire engines from Kirkdale, Crosby, Liverpool City, Croxteth and Kensington were in attendance, along with the Search and Rescue Team. Five crews and a special rescue team were at the scene. Report with photos: http://www.liverpoolecho.co.uk/news/liverpool-news/cargo-ship-evacuated-after-engine-8914116

A National Unit of the police on May 20 boarded the "Julia" in the western harbor area of Amsterdam. The cook of the ship had died under suspicious circumstances. At the request of the Cypriot authorities 11 crew members were arrested. The 26-year-old Ukrainian had been lost over board in the English Channel for unknown reasons. The crew got him back on board, but he was deceased. After the ship docked in Amsterdam, the police conducted an investigation.

On May 18, 2014, the CROSS Jobourg was informed by the crew of the "Julia" that one of his crew members, a Ukrainian of 26 years, was lost overboard from the tanker which was enroute from Liverpool to Amsterdam 24 nautical miles north of Cherbourg. Immediately, a large scaled SAR operation was started. The CROSS deployed an EC 225 helicopter of the Navy Base in Maupertus, an F50 aircraft of the Navy Base in Lann Bihoué which was on a scheduled maritime surveillance flight, a British Agusta helicopter from Portland and other means. After some hours, the Maritime Prefect decided to stop the active search.