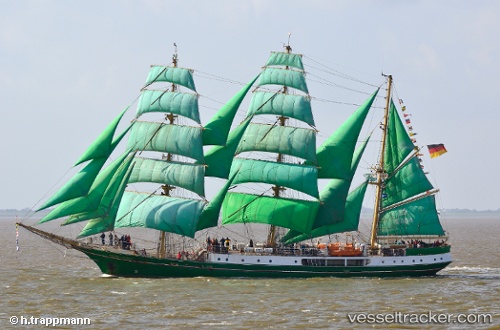 The "Alexander von Humboldt" is on its way back to Bremerhaven. The ship sailed from Sevilla on May 2, 2013, and will return to its longtime homeport after 493 days when the last leg of 15 days is completed on May 17 when the ship is being expected at the BVT Yard. The return trip from the Bahamas had started in January after one year of day tripping around the island which had turned out to be a commercial loss. On Mar 15 the tall ship left Freeport, reached the Azores on Apr 8 and the port of Sevilla on Apr 21 where it was intended to drydock the vessel, but the technical infrastructure was not the way the owner company Heinrich Rönner (RHR) had imagined it. To have no risk, it was decided to take the barque back to Bremerhaven, and on Apr 30 it was allowed to leave by the port authority. A pilot guided the ship through the 85 km long Alfonso XIII Canal to the Gulf of Cádiz from where it headed directyl to Bremerhaven with a crew of 17, among them crew members of the German tall ships "Großherzogin Elisabeth", "Roald Amundsen" and the Kiel-based "Thor Heyerdahl". The aim of the yard overhaul is to get a licence for further 3-5 years by the German Lloyd. The further plans have not yet been specified. There are thoughts of daytripping from Ibiza or the use as a floating hotel or restaurant ship in Bremerhaven.

Grand Bahama Island, The Bahamas - The Tall Ship "Alexander von Humboldt 2" arrived for a three day visit at Freeport Harbour. The Alex 2 which replaced the "Green Lady" two years ago has been on a transatlantic crossing and will undergo a crew change here in Freeport. The ship is under the command of Captain Harald Meier who also sailed the "Green Lady" from Bremerhaven, Germany to Barbados last year where he handed her over to Captain Ulrich Lamprecht who took her into Freeport. Here the "Green Lady" was greeted in a wonderful and warm welcome ceremony on March 15th 2012 by officials from the Ministry of Tourism, Grand Bahama Port Authority, Harbour Company and members of the community.

Alexander von Humboldt, a German ship originally built in 1906 arrived to her new home in Grand Bahamas Island yesterday (March 15th, 2012). The vessel left Bremerhaven, Germany, on January 14th after serving for 105 years as a sail training ship for the German Sail Training Association. She sailed majestically into the Freeport Harbour under the command of Captain Harald Meyer, and many local onlookers were perched for optimal viewing hours early at Pier One Restaurant to pay witness to the historic moment. A welcome reception was held and remarks were given after mooring by Karen Seymour, Director of Tourism for Grand Bahama; Ian Rolle, President Grand Bahama Port Authority; and Erika Gates, President Grand Bahama Nature Tours. A plaque presentation took place by Capt. Orlando Forbes, Port Director. Closing out the ceremony with a Vote of Thanks was Alarie Turner, Operations Manager, Freeport Harbour Company.