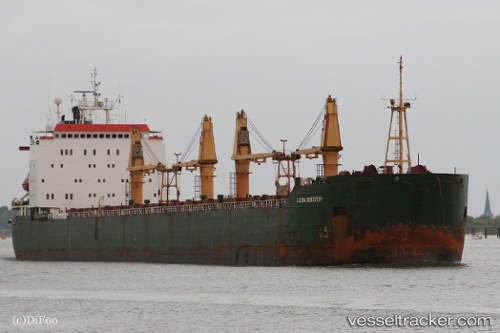 The Seaway shut down about 8 a.m. Oct 26 at Beauharnois, Quebec, reported Great Lakes and Seaway Shipping. Algoma Discovery, which was downbound hit the ship arrestor in Lock 4, collapsing the frame holding the cables that stop the ship from hitting the gates. Waiting in Lock 3 upbound is the new Wagenborg ship Exeborg (IMO 9650482, dwt 12004, built 2013). Several ships are waiting above and below the Beauharnois Canal for the ship arrestor to be replaced. High winds may slow the progress as craning heavy loads in these conditions may be unsafe. As of 10 p.m. Oct 26 the crane has yet to arrive. As of 0100 UTC Oct 28 vessel was in the same position, lock seems to be still closed.

On May 01 2012 fire erupted in cargo hold of bulk carrier Algoma Discovery, docked at Pier 22 in Hamilton, Ontario, Great Lakes. Firefighters were called at 1530 LT, fire was under control after some 2 hours fight. Fire started in a service tunnel, presumably it was electrical. It is understood that the vessel was in ballast. Algoma Discovery was in Hamilton during winter lay-up.