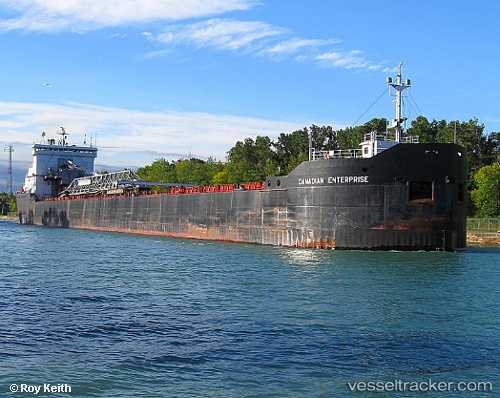 Coast Guard air crew airlifted a Canadian man in the afternoon of Oct 27, 2013, from the "Algoma Enterpise" in the vicinity of Pelee Passage of Lake Erie. Shortly after 2 p.m., a search-and-rescue controller at the Coast Guard 9th District command center, was contacted by a SAR controller at JRCC Trenton, requesting assistance with the medevac of a 57-year-old man aboard the vessel. The man was reportedly suffering from severe bleeding. After conferring with the on-duty flight surgeon, the 9th District's SAR controller directed the launch of an air crew aboard an MH-65 Dolphin helicopter from Coast Guard Air Station Detroit, located on Selfridge Air National Guard base in the Northern suburbs of Detroit. The air crew launched from Air Station Detroit at 2:38 p.m. and arrived on scene with the Algoma Enterprise at 2:55 p.m. The air crew lowered a rescue swimmer, who was a trained emergency medical technician, to the ship to facilitate the airlift. After the safe airlift of the patient, the air crew transported him to the Windsor, Ontario, Airport where emergency medical services were awaiting. The medevac was completed just after 4 p.m., with the man in stable condition. Report with photo: http://www.uscgnews.com/go/doc/4007/1941602/PHOTO-Coast-Guard-helicopter-crew-airlifts-Canadian-man-from-commercial-vessel#sthash.Dp9gZmua.dpuf