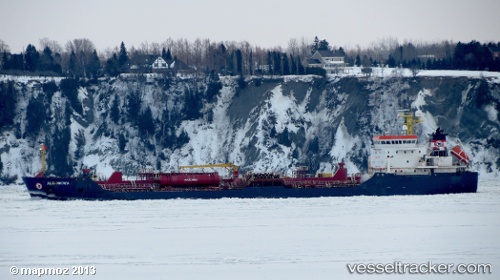 The "Algonova", coming from Port Colborne, suffered an engine failure while transiting the Welland Canal at St. Catharines, Ontario, in position 43 06 42 N, 79 11 48 W, on June 16. The vessel berthed in the canal to carry out repairs. At 10.40 a.m. it entered the port of Montreal.

The "Algonova" suffered an engine failure while transiting the Welland Canal near St. Catharines, Ontario, on May 15, 2019, at 3 p.m. The vessel berthed in Port Colborne at 4 p.m. and continued to Montreal after repairs, where it arrived on May 19 at 1.45 a.m.

A fire occurred on the "AlgoNova" on Jan 19, 2014, at 9 a.m. 83km north of Gaspe. The chemical tanker had sailed from Halifax on Jan 17. A Cormorant Helicopter and a Hercules aircraft from 14 Wing Greenwood were sent to the area where the "Algonova" reported the fire in the Honguedo Strait. A Coast Guard ship and commercial vessel also pulled alongside. The crew extinguished the fire and no one was hurt.