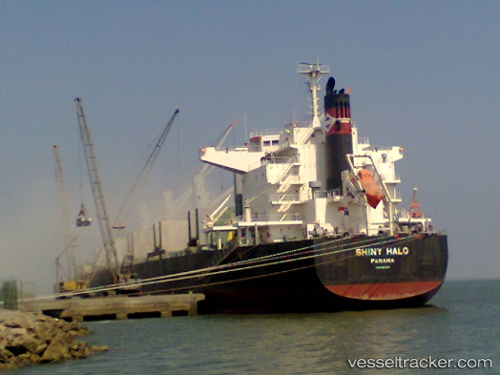 Bulkcarrier threatened to run aground

The "Shiny Halo" was threatened to run aground on the reef in Koumac, New Caledonia, on Nov 12, 2018 at 5 p.m. The unloaded ship, coming from Xiamen, was waiting for a pilot to cross the Koumac passes when it suffered a blackout and started drifting towards the reef. The Nouméa MRCC immediately dispatched three port tugs from Koumac - two of the Georges Montagnat Mining Company and a third of the SMSP, as the vessel was drifting to the reef, which was two nautical miles away. The ship owner, at the request of the MRCC, also tasked two other tugs from Téoudie, as well as an offshore tug of KNS from Vavouto. Arriving in the area shortly after 6.30 p.m., the three tugs from Koumac, coordinated by the pilot, succeeded in stopping the drift only one mile off the reef. After the arrival of the offshore tug in the evening, they jointly towed the ore carrier then to the anchorage of Teoudie, where the convoy arrived at 10 p.m.. At the request of the shipowner, inspections were started to determine the reasons for the damage and to make the necessary repairs as quickly as possible. On Nov 15, the ship was due to start loading a cargo of NMC ore.