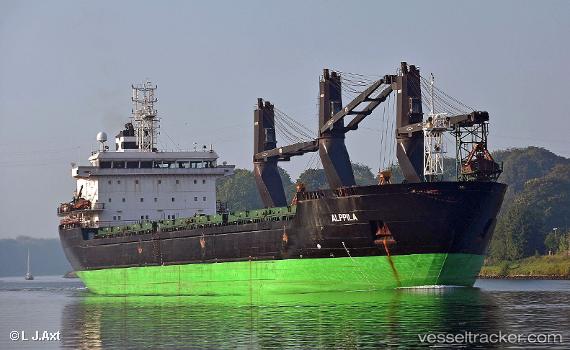 The 'Alppila', carrying 18,000 tons of Ukrainian corn, arrived early on June 13 in A Coruña, using a new maritime route that aims to avoid Russia’s blockade of Ukraine’s ports on the Black Sea. The ship due to be unloaded by June 14. It’s the first shipment of Ukrainian grain to reach northwestern Spain by sea, using “a new maritime route opened in the Baltic Sea to avoid the Russian navy’s blockade of Ukraine’s ports on the Black Sea since the start of the war” on Feb 24, the animal feed producers group Agafac said. Small quantities of corn have left western Ukraine in trucks for Poland and Romania, and the corn which arrived in Spain was loaded onto a ship at the port of Swinoujscie.

The 'Alppila' has arrives on June 10, 2022, at the port of A Coruña with 18,000 tons of Ukrainian corn, in what is the first shipment of cereals through a new route opened by the Baltic to circumvent the blockade to which the Russian navy has subjected the Ukrainian ports of the Black Sea since the beginning of the war. The corn that will be unloaded at the San Diego dock, to be stored and later sent to the factories that make cattle feed, was first transported by road from the Ukrainian borders with Romania and Poland to the port of Swinoujscie, where It was loaded onto the freighter, which before setting sail for Galician waters made a stopover in the port of Brunsbüttel. The corn will very well received by feed manufacturers”, who continue to suffer, as well as farmers and consumers, the strong increases in raw materials. Report with photo: https://www.atlantico.net/articulo/galicia/barco-maiz-ucraniano-logra-sortear-bloqueo-ruso/20220609233942919122.html

Finland’s ESL Shipping has acquired 2011-built self-unloading bulk carrier Alppila from SEB Leasing. The acquisition was made as part of a lease agreement signed between the two parties in 2011. No price was given for the transaction, and the market value of the ship is around $4.42m according to VesselsValue.