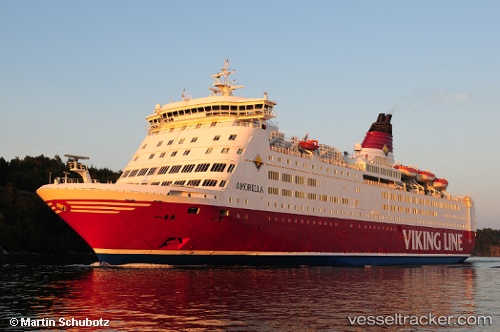 The grounding of the 'Amorella' on Sep 20, 2020, in Apotekarfaret, was caused a.o. by shortcomings in the maintenance, the Accident Investigation Center's investigation found out. The initial cause of the grounding was a technical fault in the propeller system. The follow-up of the function of critical components and the need for maintenance and replacement should be evaluated more systematically with a view to how they are used. This presupposes closer cooperation between the manufacturers and suppliers as well as the end users, stated investigation leader Risto Haimila. The Accident Investigation Board provided four safety recommendations on the basis of the investigation. Two of them were aimed at Viking Line. These recommendations applied to the maintenance measures on the ship as well as the cooperation between the bridge and the engine control room. As a result of the investigation, the Accident Investigation Board also intervened in the development of maritime rescue preparedness in major accident situations. It took the sea rescue center almost half an hour to carry out the alarms in the first stage. Communication with the vessel and information about the incident was not immediately distributed to all actors. Something should be done so that we are ready to act faster when a situation occurs and start the rescue measures, emphasized the director of the Accident Investigation Center, Professor Veli-Pekka Nurmi. The Accident Investigation Board also recommended that the Border Guard should develop a maritime rescue preparedness in major accident situations in terms of resources, the creation of a situation, the alert and the distribution of tasks. The last recommendation was addressed to the Swedish Transport and Communications Agency: Tasks related to the inspection of ships have been transferred to the classification societies, which need an application instruction issued by the authority to assess the consequences of changes on the bridge with regard to navigation safety.

Salvage will take a few days

At least a few days will pass by before an attempt is made to refloat the 'Amorella'. On Sep 20 divers were still investigating the bottom of the ship, which has been breached in several places. It has been decided that the ferry will be repaired at Turku Repair Yard when it is pulled off the ground, but it is not known whether it will have to be towed, or can cover the stretch on its own. Only a small part of the crew has remained on board. Aboard the ferry were also about 40 trucks, most of them with general cargo. There was no loose cargo on board the ferry. There was no sign of pollution near the ship. Local authorities have launched an investigation into the incident in collaboration with the ferry's flag state. On Sep 22 the tugs 'Jupiter' (IMO: 9287431) and 'Kraft' (IMO: 7618399) had joined the 'Neptun'. The goal was to be able to move the ship from Järsö to the port of Långnäs, Åland on Sep 23. After that, the 'Amorella' will be taken to the shipyard in Naantali. The exact timetable has not been determined.

The 'Amorella' was intentionally run aground in the Åland archipelago on Sep 20 with 280 people aboard. Patrol boats evacuated the passengers. The crew remained on board und kept the pumps running. The ferry was enroute from Turku to Stockholm with 80 crew and almost 200 passengers on board. Upon approaching Marihamn at 12 50 p.m. the ship ran aground in the Haesslo fjord in the passage between two rocks and was breached with ensuing strong water ingress. The ship was run aground off Järsö island. Oil booms were laid out by the Finnish Coastguard in the evening.