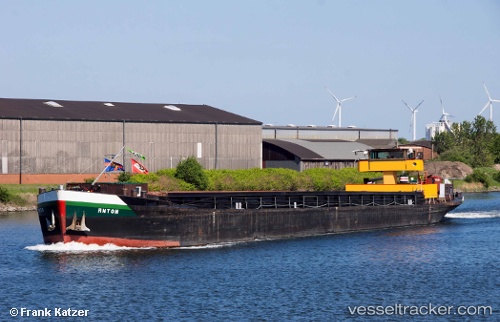 After the leak in the foreship of the "Anton" was patched, the ship continued to Bremen, its port of Destination, where it berthed on June 25 at 4 p.m. . After having unloaded the cargo of gravel, it was planned to send it to a yard in Minden for repairs. On June 26 at 5 p.m. it left the industrial port of Bremen again and moved to Bremen-Hemelingen, where it berthed at 6 p.m.

Barge in danger of sinking in Dörverden

On June 24, 2015, short past 6 a.m. the master of the "Anton" remarked that the foreship had started sinking after entering the lock of Dörverden on the Weser. He backed out of the lock again, berthed his ship and at 6.14 a.m. called the fire rescue which in turn alerted forces from Dörverden, Stedorf, Verden, the Technical Support Work (THW) and the German Life Saving Society (DLRG) who attended with 90 men. Three submergible pumps started dewatering about 40 tons water from the bilge underneath the cabin area in the foreship. The engine room was still dry so that there was no threat of an oil pollution and it was not necessary to lay out the oil booms which held been kept ready. After 2,5 hours a leak of fist size could be traced and temporarily patched. After three hours most of the rescue forces could be stood down. However, the cabin area in the foreship was severely damaged by the water. The damage was estimated to be around 50000 Euro. The ship had been underway from Minden to Bremen with 1400 tons gravel. Divers of the maritime authority Verden and an inspector were sent in the frame of the investigation how the ship had suffered the leak. German reports with photos and video: http://www.presseportal.de/blaulicht/pm/57922/3055550 http://www.weser-kurier.de/region/verdener-nachrichten_artikel,-Binnenschiff-havariert-bei-Doerverden-_arid,1153006.html http://www.nonstopnews.de/galerie/20789 http://www.seg-presse.de/aktuellepresseinfos/detail.html?id=203 https://www.youtube.com/watch?v=R-f1FsWZOdA&feature=youtu.be

On Feb 2, 2011, at 4.20 p.m. the gravel-laden "Anton" underway from Rinteln to Bremen on the Weser, was in collision with the Polish "Frimari", 890 ts (EU-Nr.: 04,010,150), which was fully loaded with soybeans. Just before the Weser loop between Landesbergen and Nienburg the "Frimari" suffered rudder failure and ran into the "Anton" which suffered a gash of 6 metres length and water ingress. The "Frimari" lost an anchor. She drifted perpendicular to the waterway and got stuck. The Weser was blocked between river mile 259.5 to 260.5. The "Anton" was berthed at a nearby quay where 250 tons cargo were unloaded from the aft cargo hold to get the leak above water. Push boats were to bring both vessels to repair yards on Feb 3. German report with photo: http://www.mt-online.de/start/letzte_meldungen_aus_der_region/4218512_Nienburg_Schiffskollision_auf_der_Weser_-_Leckgeschlagener_Frachter_knapp_gerettet.html