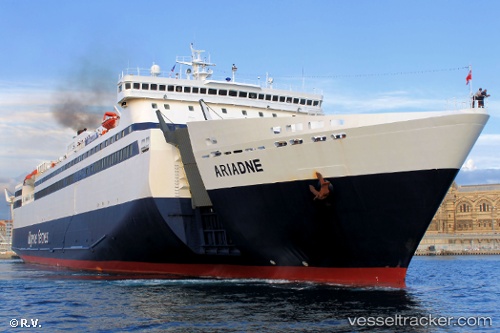 At the port of Cagliari two ships, both from Tirrenia, were in allision during a mooring maneuver on Oct 23, 2019, at 3.30 p.m.. The 'Ariadne' was about to leave as scheduled for Palermo. The 'Massimo Mura' was entering the port, but the strong sirocco wind which hit Cagliari made the maneuver very complicated. While two tugs assisted, a cable broke due to the strong wind with gusts up to 60 kilometers per hour. The 'Massimo Mura' then drifted towards the 'Ariadne' which was still moored on the quay, and hit it with its bow at starboard side. The impact was violent, but a subsequent maneuver allowed the ferry to move away from the quay and return to a safe distance. Both ships suffered superficial damage such as scratches and could continue their operations. No one was injured. The Port Authority of Cagliari conducted investigations. The 'Ariadne' left the port bound to Naples at 7.45 p.m. and arrived in port on Oct 24 at 9.30 a.m. The 'Massimo Mauro' sailed again on Oct 24 at 1.15 a.m. with an ETA at Livorno as of 7 p.m. Italian reports with photos: https://www.corriere.it/cronache/19_ottobre_23/cagliari-collisione-porto-un-cargo-traghetto-moby-tirrenia-a501bab6-f5a7-11e9-ad25-1b4f9a2d3eb8.shtml https://www.castedduonline.it/scontro-porto-cagliari/

Ferry allided with pier in Piraeus

The "Ariadne", heading to Chios and Lesvos, was forced to return to Piraeus in the night of May 27, 2016, for a technical inspection after the allision with a pier during its departure at 9 p.m. The ship departed again on May 28 at 01.45 a.m. after an inspection revealed that the ferry only had suffered minor damages to the stern that did not compromise its seaworthiness.