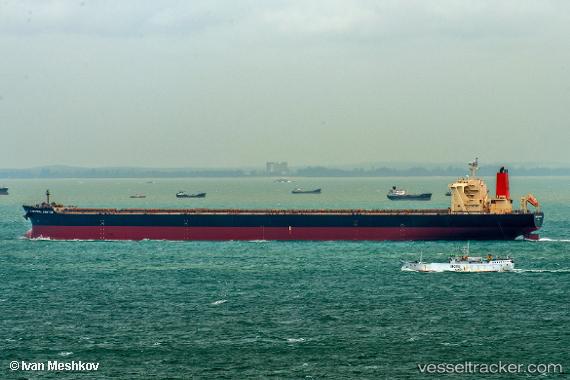 Japanese shipping firm Mitsui O.S.K. Lines Ltd has paid about $39 million to a Chinese court towards securing the release of one of its ships which was seized over an alleged payments dispute dating back to World War Two, Japanese media reported on Thursday. The Yomiuri newspaper and public broadcaster NHK, quoting unnamed people they said were familiar with the matter, said Mitsui had paid about 4 billion yen in compensation and interest to the Chinese court. Its ship, the "Baosteel Emotion" 226,434 deadweight-tonne ore carrier, was seized on Saturday. Mitsui O.S.K. spokesman Atsushi Seki told Reuters he could not immediately confirm the reports. He said the company was still working to release the vessel, which the Chinese court seized over Mitsui's alleged failure to pay compensation stemming from a wartime contractual obligation.

Tokyo said Tuesday (Apr. 22) it has lodged a formal protest against China's seizure of a Japanese ship over unpaid bills dating back to the 1930s, in the latest row to underscore the bitter enmity between the Asian giants. Authorities in Shanghai said on Saturday they had impounded the large freight vessel owned by Japanese shipping giant Mitsui O.S.K. Lines in a dispute over what the Chinese side says is money owed from the 1930s, when Japan occupied large swathes of its neighbour. The two sides are embroiled in a territorial dispute over a small archipelago, as well as snapping at each other over differing interpretations of history. On Tuesday, some Japanese media suggested the ship's seizure was meant to underline Beijing's assertiveness ahead of US President Barack Obama's arrival in Tokyo on Wednesday, part of an Asian tour aimed at reinforcing Washington's regional security alliances. - See more at: http://www.straitstimes.com/news/asia/east-asia/story/japan-lodges-protest-against-china-ship-seizure-20140422#sthash.tY4XEEZj.dpuf

A court in Shanghai has ordered the seizure of a Japanese ship over legal claims dating to before World War II, adding a point of contention to the sometimes rancorous relationship between Japan and China. The ship, the Baosteel Emotion, is a bulk carrier owned by Mitsui O.S.K. Lines, which the court says failed to pay an obligation resulting from a contract dating to the 1930s. The vessel is berthed at Majishan port, southeast of Shanghai. Calls to the port were not answered on Monday. The Japanese government expressed concern on Monday that the court decision could undermine diplomatic and business ties between the two countries. A Chinese Foreign Ministry spokesman sought to play down any tensions, however, saying the decision was a matter of contract law and not of wartime reparations.