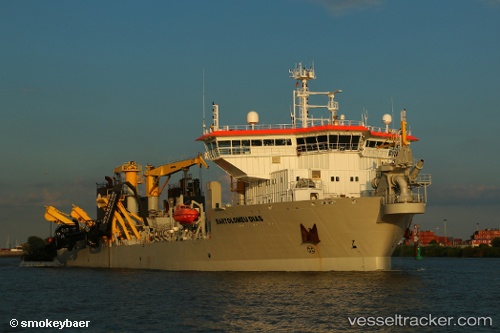 Belgium based dredging major Jan De Nul has commenced works to reinforce some 3km of the Prince Hendrik Sand Dike on the Dutch Wadden Island of Texel. The trailing suction hopper dredger Bartolomeu Dias is winning some five million m3 of sand from the North Sea and pumping it to the beach through a floating pipeline. Bulldozers spread the sand in an ongoing project expected to be completed by the end of next year. The project will create a future-proof water barrier in the form of dunes and improve the ecological value of the Wadden Sea. It will provide Texel’s 14,000 residents and one million annual visitors with assurance to be able to live, work and relax safely on the island.

On Wednesday 25 July, Jan De Nul kicked off the works for the reinforcement of the Prince Hendrik Sand Dike over a distance of 3 km. After youth director and Texel resident Rodny Stolk, together with ‘Hoogheemraad’ director Kees Stam and Jan De Nul director Francis Verhees, had sketched a picture of the future, the directors of the cooperating partners poured sand into a large hourglass. This was the signal for Trailing Suction Hopper Dredger Bartolomeu Dias to start reclaiming the first amounts of sand.

The Prins Hendrik dike in Texel, which is over three kilometres long, is strengthened with sand on the sea side, adding some 200 hectares to the island, Jan De Nul said in its press release. As from 2018, Jan De Nul N.V. will build a dynamic, unique nature reserve with dunes, salt marsh and beach in front of the current dike. The project kills two birds with one stone: the dam is made future-proof and the natural values in the Wadden Sea improve. The reinforcement of the Prins Hendrik dike was awarded by Hollands Noorderkwartier district water control board and forms part of a sizeable dike reinforcement operation in the Netherlands. In all, more than 1,100 kilometres of dikes and almost 500 locks and pumping stations will be handled until 2028. The trailing suction hopper dredger Bartolomeu Dias will put in the sand in the second half of 2018. After that Jan De Nul will start designing the landscape in the environment. The completion of the works is scheduled for mid-2019.