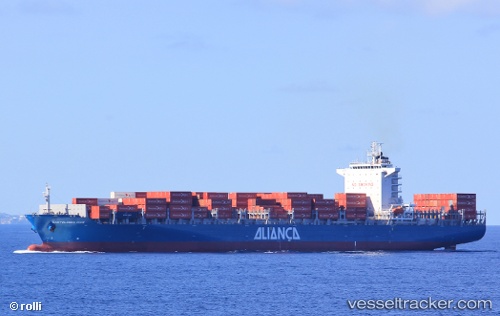 Shippers in the northern Brazilian state of Para gained new transport options to points on the East Coast of South America last week when the Bartolomeu Dias, a container ship operated by Alianca Navegacao e Logistica, berthed for the first time at the port of Vila do Conde. The Bartolomeu Dias — named after the Portuguese explorer who discovered Brazil in 1500 — was launched at the Tecon Rio Grande terminal in southern Brazil April 14. With the capacity to handle 4,848 20-foot-equivalent containers, the Bartolomeu Dias is the largest vessel in the Brazil cabotage and East Coast of South America or ECSA coastal services. Alianca added four other new vessels of 3,800 TEU capacity to the ECSA and Brazil cabotage services in 2013 and 2014. The cabotage service connects 10 Brazilian ports from the jungle city of Manaus to Rio Grande. The Hamburg Süd subsidiary plans to launch the Vincente Pinzon, a sister ship to Bartolomeu Dias in July or August. Bartolomeu Dias, which is 837 feet long with a 122-foot beam and a 41-foot draft, was delivered to Alianca earlier this year from the Shanghai Shipyard Co Ltd. in China, the same yard where all six vessels were built for approximately $232 million, Alianca said. http://www.joc.com/maritime-news/short-sea-shipping/new-4800-teu-ship-boosts-brazil-south-american-coastal-trade_20150503.html

The cabotage fleet of Hamburg Süd’s subsidiary Alianҫa has once again gained a new member. Within the scope of a customer event, the new container ship “Bartolomeu Dias” was christened on 14 April 2015 at the TECON Terminal in the southern-Brazilian port of Rio Grande. The ship’s sponsor is Luciana Pereira Quartiero. Her husband, Jacques Maggi Quartiero, is vice president of Camil Alimentos S.A. Also present at the christening in the state of Rio Grande do Sul were Dr Ottmar Gast, Chairman of the Executive Board of Hamburg Süd, and Julian Thomas, CEO for Region South America East Coast for Hamburg Süd and Alianҫa. With a container slot capacity of around 4,800 TEU (including 600 reefer slots), the “Bartolomeu Dias” is the largest ship that Alianҫa has ever deployed in its Brazilian coastal service. The ship carries the name of the Portuguese seafarer and discoverer Bartolomeu Dias, who discovered Brazil on 22 April 1500 while serving as a captain in Pedro Alvares Cabral’s fleet.