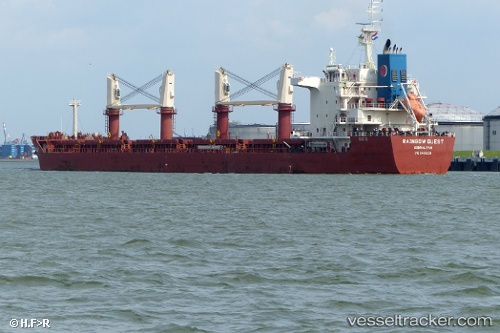 The Ukrainian master of the 'Rainibow Quest', Vadim Humenyuk, pleaded guilty to being under the influence of an intoxicant when the ship was preparing to head to South Korea from San Francisco Bay after stopping for refueling "I appreciate the outstanding collaboration from the San Francisco Bar Pilots, Customs and Border Protection, and the U.S. Attorney's office for ensuring safety on our waters, and protecting the maritime public, property, and environment," said Marie Byrd, US Coast Guard Captain of the Port. A San Francisco Bar pilot had reached out to Coast Guard Sector San Francisco Vessel Traffic Service personnel on Dec 10, 2019, in order to report about the intoxicated state of the captain of the 'Rainbow Quest'. A sobriety test was conducted on Humenyuk on the late evening of Dec 10 by investigators from the US Coast Guard. Another test was conducted the following morning of Dec 11, 2019. The Ukrainian failed both the sobriety tests. Following this, he was charged with operating a non-recreational vessel under the influence of alcohol in violation of 46 USC 2302(c), which is a Class A misdemeanor. Humenyuk was set to be sentenced on Jan 3, 2020, He faces up to one year of incarceration, the maximum statutory penalty. He also faces a fine of up to $100,000 and an additional year of supervised release.

In the evening of Nov 7, 2014, the "Rainbow Quest" hit the Brooklyn Bridge in New York with its light tower. The ship was sailing south on the East River when it allided with the underside of the bridge at about 11 p.m., forcing authorities to halt traffic for about two hours. Department of Transportation workers were on the bridge late in the night inspecting the damage as a NYPD Harbor Patrol boat sailed underneath.

On Apr 27, 2012, at 9 a.m. the "Rainbow Quest" contacted the MRCC Corsen to report that the Russian chief engineer had abdominal pains. The ship was about 22 nautical miles from Brest, bound for the Mediterranean. An EC 225 Navy helicopter took off with a medical team of the Army Medical Service on board to join the ship after consultation with the medical consulting center of Toulouse. The sailor was airlifted on a stretcher aboard the EC-225 fleet 32F. Around 11:00, the patient was treated by the medical staff of the hospital de la Cavale Blance in Brest. Photos and video: http://www.premar-atlantique.gouv.fr/galeries/Rainbow-Quest