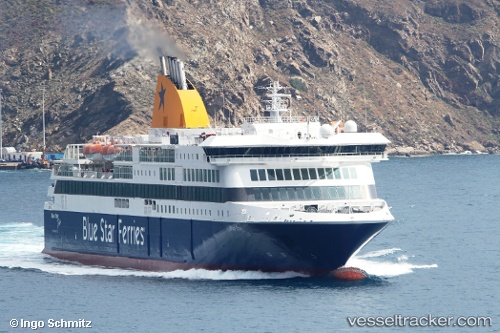 Greece's Blue Star Ferries, a subsidiary of Attica Group, and Eco Marine Power (EMP) of Japan will deploy and evaluate renewable energy technology on board the passenger and car ferry Blue Star Delos, EMP says. The project is intended to pave the way for more use of EMP's systems in the shipping sector. The project will include installation of a marine solar power system, to be integrated into the Aquarius Management and Automation System (Aquarius MAS). The management system will keep track of the solar array's performance, as well as the vessel's bunker consumption, while calculating emissions data. The Aquarius MAS system, developed by EMP and KEI System Ltd. of Japan, is specifically intended to help integrate renewable energy systems into a platform that also monitors main engines, generators and pumps.

The Board of Directors of Attica Group wishes to announce the delivery of the new-built Ro-Pax vessel Blue Star Delos which was built at Daewoo Shipbuilding & Marine Engineering Co., Ltd, of Korea. Blue Star Delos is the first of two vessels ordered in June 2009 and has overall length 145.50 meters, a speed of 26 knots and the capacity to carry 2,400 passengers and 450 private vehicles or 50 freight units and 150 private vehicles. Blue Star Delos is expected to arrive at the Port of Piraeus at the beginning of November, 2011 and will be deployed in the Piraeus-Paros-Naxos-Ios-Thira (Santorini) route. The total acquisition cost of Blue Star Delos exceeds Euro 70 million, of which Euro 32 million come from Attica’s Own Funds and the balance from bank financing. Speaking of Attica’s new investment, Mr. Petros Vettas, CEO of Attica said: “In the current challenging times of our country, Attica’s scope to provide first class sea transportation services with modern, new and fast ships for the benefit of tourism and the islands’ inhabitants and visitors, is further enhanced with the addition to our fleet of Blue Star Delos today”. http://www.attica-group.com/pdf2/DELIVERY%20OF%20BLUE%20STAR%20DELOS.pdf

The "Blue Star Delos" on May 7, 2011, left the DSME shipyard quay to undergo one day sea trials. The vessel will be delivered to its Greek owner at middle of May before heading to Greece on her delivery trip. Vessel is expected to begin commercial operations by beginning of July 2011.