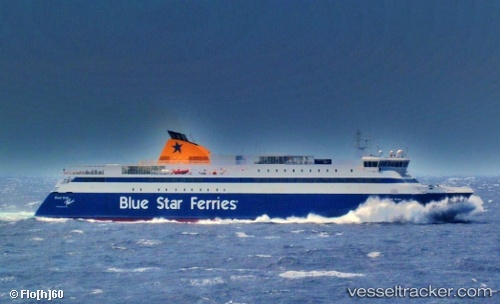 A traffic accident occurred in the port of Syros in the afternoon of Aug 21, 2019, during the loading process of the "Blue Star Paros". A vehicle with a 51-year-old driver hit and injured a 46-year-old crew member of the vessel. The crew man was taken to the Syros General Hospital for medical treatment, and a preliminary investigation was being carried out by the relevant Port Authority.

On May 9, the "Blue Star Paros" had to remain in Syros due to damage to the sern ramp with 566 passengers on board. The port authority detained the vessel until repairs were carried out. It had sailed at 5.30 p.m. on May 9 from the port of Piraeus bound for Syros, Paros, Naxos, Donousa, Aegiali, Astypalea. At midnight, with a delay of more than 2,5 hours, the ferry departed from Syros. Just two days ago there was a problem with the rudder of the ship. Greek report with photo and video: https://www.in.gr/2019/05/10/greece/anaxorise-blue-star-paros-apo-ti-syro-aganaktismenoi-oi-epivates/

In the morning of May 7, 2019, the "Blue Star Paros" suffered a mechanical damage while sailing off the east coast of Amorgos with 17 passengers and 89 crew members on board. The ship, which was operating a scheduled service from Astypalea to Aegiali Amorgos - Donousa - Naxos - Paros - Piraeus, had a partial dysfunction in its rudder, resulting in its inability to reach Aegiali Amorgos and diverted to Piraeus, where the ferry arrived at midday. The Aegean Coastal Police Department of Pileidas detained the ship until the submission of a class confirmation after an inspection by the attending classification society.