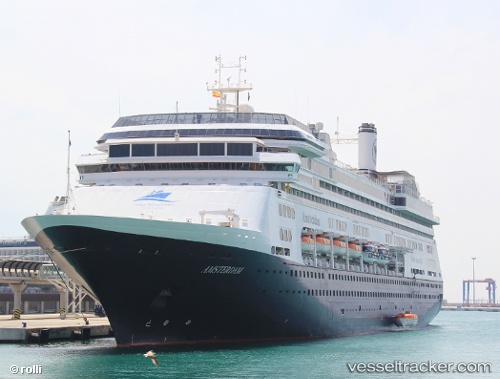 The SAR heliopter Helimer 402 was mobilized from the CCS Finisterre of Salvamento Marítimo in the morning of March 6, 2022, for the medevac of a passenger from the 'Bolette', along with her companion. They have been transferred to the A Coruña airport, where an ambulance was waiting. The cruise ship was en route from Southampton, UK, to Funchal with an ETA as of March 8.

Holland America Line announced that the 'Amsterdam', 'Maasdam', 'Rotterdam' and 'Veendam' have been sold and will be transferring to undisclosed buyers. The ships have been sold in pairs, with the 'Maasdam' and 'Veendam' transferring to one company in August 2020, while the 'Amsterdam' and 'Rotterdam' will move to another company in fall 2020. One pair will be going to a new cruise brand. On July 15, 2020, the wholly owned subsidiaries of Bonheur ASA have entered into agreements with HAL Nederland NV (part of the Carnival Corporation Group) for the acquisition of the 'Rotterdam' and 'Amsterdam' to be operated by Fred. Olsen Cruise Lines Ltd., UK, which is also a wholly owned subsidiary of Bonheur. The vessels will be renamed 'Bolette' and 'Borealis'.

Five South Africans and two ill crew members disembarked the 'Amsterdam' after the ship berthed at Durban on April 9, 2020, after receiving a clean bill of health from the department of health and security clearance from authorities – including the South African Maritime Safety Authority (Samsa), Transnet National Ports Authority (TNPA) and the department of transport – at the Port of Durban. The two crew members' illness was not related to Covid-19. The ship had arrived outside the Port of Durban on April 5 to refuel and restock provisions. There were no passengers on board - only 558 crew members, including five South Africans. Prior to arrival, the master had reported there were persons on board showing signs of flu-like illness. A doctor from Port Health boarded the ship at anchorage to take swabs from symptomatic individuals and direct contacts. The results were received from the NICD [National Institute for Communicable Diseases] on April 8 confirming all tests were negative. "The ship had started a four-month global tour at Port Everglades in Fort Lauderdale, Florida on Jan 4. Due to Covid-19, the cruise was ended prematurely in Fremantle, Australia, on March 22. The ship was now on its return trip to Fort Lauderdale.